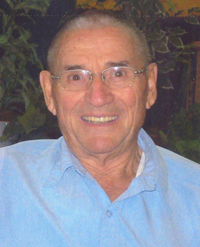 Hank P. Dyck, age 85, passed away peacefully on November 14, 2015, at the Palliser Regional Care Centre, surrounded by his family. The Funeral Service was held at 2 p.m. on November 19, 2015, at Zion Mennonite Church, with Herman J. Wiebe officiating. The Interment Service was at Hillcrest Cemetery. Hank was survived by his wife, Eva, whom he married on August 24, 1954; his daughters, Pat (Robin) Bunkosky, Glenda (Neil) Grant, and Nancy (Casey) Tomkowicz; his grandchildren, Thorin and Tanita Bunkosky, Tyler, April and Sherri Plante, and Matthew and Zachary Tomkowicz; his step-grandchildren, Andrew and Alissa Grant; his brother, Ben (Leona) Dyck, and numerous brothers-in-law, sisters-in-law, nieces and nephews. He was predeceased by his parents, Peter W. and Anna Dyck; and his siblings, Anna, in infancy, Anna Penner, Susie Wiens, Bill, John, Ike, Jake, Agnes Wiens, Dave, and Peter, in infancy. His first job was working for 3 years as a farmhand on a local farm, followed by working for a bridge construction crew. He first started working at Coopers in Swift Current as a delivery truck driver, and then after it became the Pioneer Co-op, he moved to the grocery department, and later became the grocery and cafeteria manager. In 1974 he moved to Medicine Hat to become the grocery manager at the Medicine Hat Co-op, where he worked until his retirement in 1990. He and Eva returned to Swift Current upon retirement, where he became a regular volunteer for the Mennonite Village Committee and the Zion Mennonite Church. Hank enjoyed playing guitar and singing, softball and baseball, curling, golfing, camping and home-renovating. He especially enjoyed having coffee with friends and spending time with his grandchildren. Donations in his memory may be made to the Heart & Stroke Foundation, 1738 Quebec Avenue, Unit 26, Saskatoon SK S7K 1V9, or to the Alzheimer Society of Saskatchewan, 301, 2550 12th Avenue, Regina SK S4P 3X1. Warren’s Funeral Home, Swift Current, in charge of arrangements. For further information please phone 306-773-8831 or visit our website at www.warrensfuneralhome.com and express your sympathy to the family in our book of condolence.