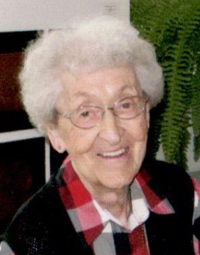 Helen Anderson of Medicine Hat, beloved wife of the late Gordon Anderson, passed away on Sunday, November 15th, 2015 at the age of 95 years. Helen leaves to cherish her memory her children, Lawrence “Larry” (Donna), Don (Linda), and Grace Torrance; six grandchildren, Kathryn (Myles), Daniel (Jessica), Kristi (Chris), Erin, Alexander “Alex”, and Ian; and three great grandchildren. She also leaves to mourn, her sister, Edith Sparks; her sister-in-law, Wilma (Don) Gathercole; special cousin, Sadie Alward; several nieces and nephews; and son-in-law, Ken Torrance. Helen was predeceased by her husband, Gordon; and her parents, Don and Imogene McEntee and many cherished friends. Helen was born in Calgary on May 27th, 1920. Her family settled in Gleichen for seven years before moving to Medicine Hat for a short time and then to Brooks. Helen attended Calgary General Nursing School and nursed at Bassano, Brooks, and the original Medical Arts Centre on 2nd Street in Medicine Hat. On September 12th, 1950, Helen married Gordon in Brooks and they settled in Medicine Hat. She enjoyed traveling, spending time at their cottage in Elkwater, and the company of her family and friends. Helen was a long-time member of Fifth Avenue Memorial United Church and was an active volunteer with the UCW Unit #5 and the Ladies of the Shrine. Helen will be greatly missed and lovingly remembered by her family and friends. The Funeral Service will be held at FIFTH AVENUE MEMORIAL UNITED CHURCH, 476 – 4th Street SE, on Saturday, November 21st, 2015 at 1:00 p.m. with Reverend Helen Reid officiating. Interment will follow in the family plot at Hillside Cemetery. Memorial gifts in Helen’s memory may be made to the Fifth Avenue United Church Memorial Fund, 476 – 4th Street SE, Medicine Hat, Alberta, T1A 0K6 or a charity of ones choice. Condolences may be sent through www.saamis.com or to condolences@saamis.com subject heading Helen Anderson. Funeral arrangements are entrusted to