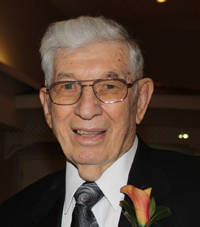 Predeceasing Elmer, were his parents, John and Suzanna (Brunner) Ebel; his sister and husband, Anna (Ted) Aman; his two brothers and their wives, John (Freida) Ebel and William (Elsie) Ebel; as well as his infant son, Archie, in 1946.

Elmer was born in Kuest, Saskatchewan on his parent’s homestead. He took over the family farm in 1944 when his father suddenly passed away. Together with his new bride, Annie, they worked the farm and raised the family until 1972, when they moved to Medicine Hat. Being semi-retired and needing to be busy, he added two hours on to every day, by driving out to the farm to continue his farming activities. After a short while, his experience with machinery and “fixing”, led him to a new career at Hat Farm Supply & Cypress Farm Supply where he enjoyed the camaraderie with the customers and fellows.

Elmer loved life and had many interests and hobbies. His faith in God was steadfast, a theme he carried to the charities he supported, community service work, fishing with his friends, woodworking in the condo workshop, welding at the farm, and even a good game on TV. However, nothing was more important than time shared with the family; his wife, his children, grandchildren, and great-grandchildren, who he loved deeply.

Elmer was a farmer at heart, and he also believed that a farmer’s work is never done. There is now an official and documented retirement date for Elmer; November 15, 2015. “It is finished, my work on earth is done.”

Those wishing to pay their respects may do so at SAAMIS MEMORIAL FUNERAL CHAPEL, 1 Dunmore Road SE, on Friday from 7:00 until 9:00 p.m. The Funeral Service will be held at GLENVIEW CHURCH OF THE NAZARENE, 4072 Strachan Road SE, on Saturday, November 21st, 2015 at 2:00 p.m. with Reverend Larry Dahl officiating. A private interment will take place at Saamis Prairie View Cemetery. In lieu of flowers, memorial gifts in Elmer’s memory may be made to the Cypress Hill Camp. c/o Karen Rempel, 467 Matador Drive, Swift Current, SK S9H 4L4 or to the Gideons International, Suite 177, 1415 – 28th Street SE, Medicine Hat, AB, T1A 8P9. Condolences may be sent through www.saamis.com or to condolences@saamis.com subject heading Elmer Ebel. Funeral arrangements are entrusted to