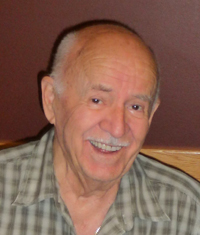 Abram “Abe” Dyck of Medicine Hat, beloved husband of the late Eva Dyck, passed away on Wednesday, November 18th, 2015 at the age of 85 years. Abe leaves to cherish his memory his six children, Garry (Sandra) of Lethbridge, Greg (Marilyn) of Medicine Hat, Wayne (Kathy Pollock) of Medicine Hat, Clarence (Debora) of Medicine Hat, Calvin (Linda) of Irvine, and Brenda (Alan) Barton of Medicine Hat; eleven grandchildren, Tyson Dyck, Ashley Dyck, Travis (Candice) Barton, Abbe Barton, Cole Dyck, Jayme Dyck, Dillon (Amanda) Dyck, Kelsey (Tyler) Vermeer, Jordana (Brent) Dyck, Caden (Kelsey) Dyck, and Taryn Dyck; two great-grandchildren, Luke and Emry Vermeer; one brother, Nick of Lethbridge; special companion, Eleanor Mandryk of Medicine Hat; brother-in-law, David Goertzen of Lethbridge; as well as numerous nieces and nephews. Abe was predeceased by his wife, Eva on May 13th, 2008; his parents, Franz and Maria; as well as numerous siblings. Abe was born on September 29th, 1930 at Standoff, Alberta and the family relocated to Coaldale shortly afterwards. He received his education at Readymade Country School and met Eva at the age of 15. They were married on June 10th, 1951. Abe and Eva farmed at Coaldale until they homesteaded at Whitla, Alberta. Abe continued to farm until 1981. He and Eva loved to travel and developed lifetime friendships from these many trips. He enjoyed his “precious metals” position at Paradise Valley Par 3 and his involvement with the Prairie Gleaners. Abe found particular enjoyment in “fast cars” and the time he spent with his family and his special companion, Eleanor. Those wishing to pay their respects may do so at CRESTWOOD MENNONITE BRETHREN CHURCH, 2348 Dunmore Road SE, on Monday from 12:00 to 12:55 p.m. The Funeral Service will be held at CRESTWOOD MENNONITE BRETHREN CHURCH on Monday, November 23rd, 2015 at 1:00 p.m. with Reverend John Willems officiating. Memorial gifts in Abe’s memory may be made to the Prairie Gleaners, PO Box 656, Medicine Hat, Alberta, T1A 7G6. Condolences may be sent through www.saamis.com or to condolences@saamis.com subject heading Abe Dyck. Funeral arrangements are entrusted to