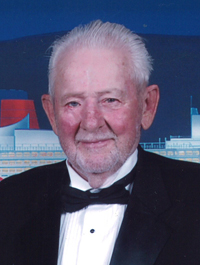 It is with great sadness that we announce the passing of Robert “Bob” C. Girling, loving husband of the late Audrey Girling (nee Bissett), on November 18, 2015, at the age of 87 years.

Following the death of his father in 1928, his Grandmother Brown brought Bob, his mother, and sister to Canada. His mother took a job as a housekeeper for Jack Gilbert, a farmer from Flaxcombe, SK. He grew up on the farm and attended Ormstown School where he was responsible for lighting the stove of the one-room school. As a young man he moved to the Medicine Hat area working for Medalta Potteries, Ogilvie Mills, and also started a chicken farm with his brother-in-law, Richard.

It was at this time that he met his future wife Audrey. He started his career with the CPR Railway in 1947, which became his life-long vocation and retired eventually in 1987 after over 39 years. In 1957, he transferred to Calgary and worked the West, North, East, & South Pools. His favourite run was from Calgary to Field, BC. He finished his career running the passenger train from Medicine Hat to Swift Current, SK. Once retired, Bob returned to the family farm in Dunmore, to work alongside his son under the Triple G brand.

Bob and Audrey had many adventures together, travelling through the western US, and bought a vacation home in Pahrump, Nevada in the early 70’s. This allowed them to escape many Canadian winters. After Audrey’s passing, Bob also travelled to England to meet with his extended family, as well as recreating the historic crossing of the Atlantic with his son on the Queen Mary 2 in 2007.

Bob took up Bridge as a pastime in 2003, which created many friends through both the Bridge Club and River Ridge in Medicine Hat. He was also a member of the Retired Railroaders Club, which kept him in contact with old colleagues, and many afternoons were spent at the CPR Pensioner’s Club. He lived an independent life on the farm, and was active right up until his very short illness and passing.

The Funeral Service will be held at SAAMIS MEMORIAL FUNERAL CHAPEL, 1 Dunmore Road SE, on Wednesday, November 25, 2015 at 2:00 p.m. with Gary W. Goran officiating. Donations in Bob’s name can be made to the Persian Dreams and Canine Themes Rescue Society to support his passion for all animals, PO Box 23134 Medicine Hat Mall, Medicine Hat, Alberta, T1B 4C7. Condolences may be sent through www.saamis.com or to condolences@saamis.com subject heading Bob Girling. Funeral arrangements are entrusted to