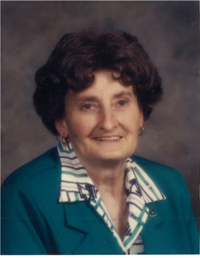 Barbara was raised on the Miller family farm near Acme, AB. She met Mike at her cousin’s wedding in Fox Valley, SK. They later married on July 1st, 1954. She and Mike settled on the family farm near Richmound, SK. She loved gardening and spent countless hours watering and nurturing the trees. They retired to Medicine Hat in 1989. Barbara was involved in various community events and activities in both Richmound and Medicine Hat, including being a long-time member of the Catholic Women’s League. She also had a huge love of animals, and because of that, the family asks in lieu of flowers, donations be made to the Medicine Hat SPCA, 55 Southwest Drive SW, Medicine Hat, Alberta, T1A 8E8. Throughout her life, Barbara always put others first.

Those wishing to pay their respects may do so at SAAMIS MEMORIAL FUNERAL CHAPEL, #1 Dunmore Road SE, on Monday from 7:00 to 9:00 p.m. and at HOLY FAMILY PARISH, 1451 Strachan Road SE, on Tuesday from 10:00 to 10:55 a.m. Vigil Rites (Prayers) will be said at SAAMIS MEMORIAL FUNERAL CHAPEL on Monday, November 23rd, 2015 at 7:00 p.m. The Funeral Mass will be celebrated at HOLY FAMILY PARISH on Tuesday, November 24th, 2015 at 11:00 a.m. with Father Albert Sayson, Celebrant. A Private Interment will take place at Saamis Prairie View Cemetery. Condolences may be sent through www.saamis.com or to condolences@saamis.com subject heading Barbara Kunz. Funeral arrangements are entrusted to