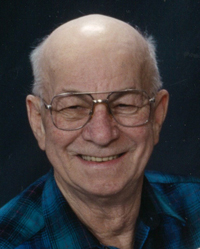 Howard Milton Stegen of Medicine Hat, beloved husband of the late Betty Stegen, passed away on Tuesday, December 1st, 2015 at the age of 81 years. Howard leaves to cherish his memory his children, John (Charmaine) Peet of Medicine Hat, Robert (Ann) Peet of Spruce Grove, Connie Stegen and Vikkii Stegen, both of Medicine Hat; five grandchildren, Katrina, Deanna, Corey (Candace), Jessica, and Tristin; seven great-grandchildren; as well as numerous nieces and nephews. Howard was predeceased by his wife, Betty in 2012; his parents, Edwin and Ruth Stegen; five brothers, Edwin Jr., Freemont, Bruce, Jack and Dale; and two sisters, Sylvia (Walter) Melsness and Irene (Victor) Knutson. Howard was born on July 9th, 1934 in Medicine Hat. He was a mechanic by trade and worked in the gas and oil field from 1975 until 1998 when he retired at the age of 63. He also worked up north in the NWT in the late 1960’s and early 1970’s as a heavy duty mechanic. He married Betty on March 28th, 1970 in Calgary. In 1975 they moved the family to Iddesleigh and built a house that they lived in until 1990. They then moved to Medicine Hat and resided here right up until his passing. Howard enjoyed woodworking and being outdoors, especially camping, hunting and fishing. He also had a pot of coffee on and had ham and Norwegian Potato Dumplings cooking many occasions and loved making jerky and smoked sausage in his smoker. Spending time with his grandchildren was very important to him. He put others needs before his own and was always willing to lend a helping hand. Those wishing to pay their respects may do so one hour prior to the funeral service. The Funeral Service will be held at SAAMIS MEMORIAL FUNERAL CHAPEL on Saturday, December 5th, 2015 at 2:30 p.m. with Pastor Syd Nelson officiating. Interment will follow in the family plot at Saamis Prairie View Cemetery. Memorial gifts in Howard’s memory may be made to the Canadian Cancer Society, 102 – 1865 Dunmore Road SE, Medicine Hat, Alberta, T1A 1Z8. Condolences may be sent through www.saamis.com or to condolences@saamis.com subject heading Howard Stegen. Funeral arrangements are entrusted to