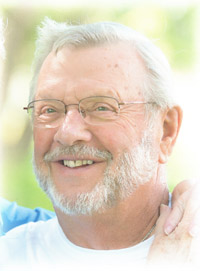 Wilfred “Wish” Walters, beloved husband of June Walters of Medicine Hat, passed away on Saturday, December 5th, 2015 at the age of 80 years. Wish also leaves to cherish his memory his daughters, Cindy (Ray) Buscholl and Alann (Garry) Klaudt; four grandchildren, Tanya (Jesse) Whitaker and son, Eric, Jenna Copper (Tylor) and sons, Zeth and Decklyn and soon to be born, Jaxon, Brenden Copper and Kurtis Copper; three great grandchildren; as well as numerous brothers-in-law, sisters-in-law, nieces and nephews. Wish was predeceased by his parents, George and Dorrena Walters. Wish was born on October 22nd, 1935 in Carlton Place, Ontario. He joined the C.A.F. as a young man and was posted in Calgary where he met and married June on August 31st, 1956. He was stationed with the Canadian Armed Forces and received his discharge in London, Ontario in 1965. Wish then worked as a Civil Servant to the Canadian Armed Forces at DRES until retiring in 1990. Wish was an avid golfer and enjoyed wood working. He volunteered many hours for the Poppy Campaign, the CNIB as a driver and helped stroke patients with rehabilitation. Wish enjoyed company with family and friends and his memory will be forever cherished by those who knew and loved him. The Funeral Service will be held at SAAMIS MEMORIAL FUNERAL CHAPEL, 1 Dunmore Road SE, on Wednesday, December 9th, 2015 at 1:30 p.m. with Gary W. Goran officiating. A private interment will follow at take place at Saamis Prairie View Cemetery. Memorial gifts in Wish’s memory may be made to the charity of one’s choice. Condolences may be sent through www.saamis.com or to condolences@saamis.com subject heading Wish Walters. Funeral arrangements are entrusted to