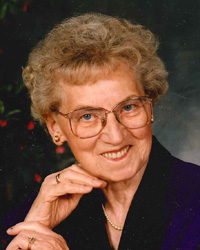 Flora passed away at South Country Village (Havenview) in Medicine Hat on November 26th, 2015 after 96 years of a life well lived. Over the past decade she had suffered with “heart and stroke” issues. God saw that she was getting tired so He put his arms around her and whispered “Come with me”. Flora was born in Tinnwalde, Germany, on August 22nd, 1919, to Helene and Herman Hanke. She was one of nine children, all of whom she survived. Her sisters, Hildegard and Adelgunde, died young. Her brothers Herman and Ernst were killed in WW II. At the age of 26, Flora and her family were forced to flee their home. From 1945 – 49, they lived in refugee camps until the Willms family, from Morse, Saskatchewan, with the help of Red Cross, were able to facilitate their immigration to Canada. Sisters, Helene Hanke, Frieda (Heinrich Groff), Maria (Erwin Schultze), and Minna (Peter Hanke) and their spouses predeceased her. All were close to her heart.

Flora met and married Waldemar Klatt of Strasbourg, Saskatchewan in 1953. Together they moved to the Klatt homestead where they farmed until 1984. Waldie passed away in 1991. Flora survived all of her in-laws: Carl (Minna) Klatt, Suzanna (John) Johnson, Hilda (Leonard) Brevig, Laura (Henry) Rodenbush, Linda (Oscar) Johnson, Irene (Sig) Erickson, Ben (Mary) Klatt, Bertha (Albert) Sheppard, Alfred (Elizabeth) Klatt, and Meta (Louie) Erhardt. She leaves to mourn her children: Heather and Vernon Klatt; her grandchildren: Brennan and Emerson of Saskatoon, Saskatchewan; and a god-child: Lorie Haubrich of Moose Jaw, Saskatchewan; as well as numerous nephews and nieces.

The family wishes to thank Dr. A.M. Keshvara for his many years of medical attention, the live-in-caregivers (Albert Tschritter, Gloria Almoros, Ruth Ferdinand and Daryl Holder) who made it possible for Flora to remain in her home until the summer of 2012, and a lovely neighbour, Sher, whose two daughters brightened her dreary days. We also would like to thank Medicine Hat Special Transit, Collette Cares and the Good Samaritans.

Those wishing to pay their respects may do so at SAAMIS MEMORIAL FUNERAL CHAPEL, #1 Dunmore Road SE, on Sunday, December 13th, 2015 from 7:00 to 9:00 p.m. and on Monday, December 14th, 2015 from 1:00 to 1:55 p.m. The Memorial Service will be held at SAAMIS MEMORIAL FUNERAL CHAPEL on Monday, December 14th, 2015 at 2:00 p.m. with Diaconal Minister Lila de Waal officiating. The interment will be coordinated with St. John Lutheran Church, Strasbourg, Saskatchewan. As an expression of sympathy, donations can be made to Victory Lutheran Church, 2793 Southview Drive SE, Medicine Hat, Alberta, T1B 2H1. Condolences may be sent through www.saamis.com or to condolences@saamis.com subject heading Flora Klatt. Funeral arrangements are entrusted to