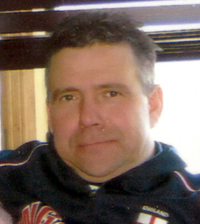 Keith Sykes of Medicine Hat, passed away on Monday, December 7th, 2015 at the age of 49 years. Keith leaves to cherish his memory his three children, Jeffery Sykes of Vancouver, Kyle Sykes and Katelyn Sykes, both of Medicine Hat; one grandson, Harley Kesler; his mother, Netta Sykes; two brothers, Steve (Denise) Sykes and Glen Sykes, both of Medicine Hat; as well as numerous nieces and nephews. Keith was predeceased by his father, Jeffery Sykes; and one brother, Andy Sykes. Keith loved spending time with family, friends, and his extended pub family. He enjoyed watching soccer and hockey and especially spending time with his grandson. Keith was always there for everyone and will be greatly missed by his family and friends. The Funeral Service will be held at ST. JOHN’S PRESBYTERIAN CHURCH, 504 – 2nd Street SE, on Saturday, December 12th, 2015 at 1:00 p.m. with Reverend Dr. Nancy Cocks officiating. Memorial gifts in Keith’s memory may be made to the SPCA, 55 Southwest Drive SW, Medicine Hat, Alberta, T1A 8E8. Condolences may be sent through www.saamis.com or to condolences@saamis.com subject heading Keith Sykes. Funeral arrangements are entrusted to