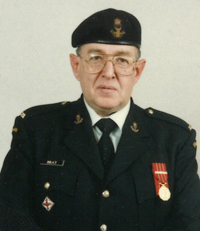 J. H. G. Bray III, beloved husband of Brenda Bray of Medicine Hat, passed away on Wednesday, December 9th, 2015 at the age of 68 years. John also leaves to cherish his memory one son, Christopher (Sherry) Bray; six grandchildren, Alyssa, Kailey, Jayden, Jacob, Katelyn, and Kaylee and her mother, Rhonda; one brother, Gerry (Murel) Bray; mother-in-law, June Kelln; two sisters-in-law, Linda (Lindsay) Fraser and Cathy (Lester) Janke; as well as numerous nieces, nephews and cousins. John was predeceased by his son, Jason Bray; his parents, John and Esther Bray; and his father-in-law, Walter Kelln. John was born on December 5th, 1947 in Medicine Hat and worked at IXL for 32 years. He married Brenda Kelln on January 8th, 1972. John was a member of the South Alberta Light Horse Regiment for over 30 years. He the President of the Local Steel Workers Union G204 for 20 years and worked at the Commissionaires in Suffield as a Security Guard until the time of his passing. John was an avid Blue Jays fan and loved to tell jokes. He loved spending time with his children and grandchildren and will be missed dearly by all those who knew him. The Funeral Service will be held at PATTERSON ARMOURY, 120 Cuyler Road SE, on Tuesday, December 15th, 2015 at 1:00 p.m. with Gary W. Goran officiating. Memorial gifts in John’s memory may be made to the Crohn’s & Colitis Foundation of Canada, 3100 – 246 Stewart Green SW, Calgary, Alberta, T3H 3C8 or to the Kidney Foundation of Canada, 6007 – 1A Street SW, Calgary, AB, T2H 0G5. Condolences may be sent through www.saamis.com or to condolences@saamis.com subject heading John Bray. Funeral arrangements are entrusted to