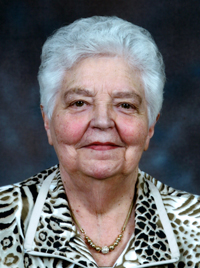 Lena Victoria Stroh of Medicine Hat, quietly and peacefully left our world and went to the arms of God on Saturday, December 19th, 2015 at the age of 84 years. Lena leaves to cherish her memory her grandson, Terrence “Terry” (Nicole) Schenk; one great-granddaughter, Willow; one sister, Katherine Wagner; as well as numerous nieces and nephews. Lena was predeceased by her first husband, David Schenk; her second husband, Sebastian Stroh; her son, Claude Schenk in 2013; two brothers, Tony Senger and Mike Senger; and two sisters, Ann (Joe) Schmaltz and Irene Wason. Lena was born on May 24th, 1931 in Mendham, Saskatchewan. She married David Schenk in 1948 and they raised their son, Claude, in Mendham. After David’s passing in 1978, Lena met Sebastian. They were married in Mendham in 1981 and later moved to Medicine Hat. Sebastian passed away in 1990. Lena loved gardening, baking and would spend hours reading her recipe books, and talking on the phone with family and friends. She enjoyed weekly shopping trips with her sister as well as spending time with her family and friends, especially her great-granddaughter, Willow. Lena was an active church member and will be lovingly remembered by all those who knew her. Those wishing to pay their respects may do so at SAAMIS MEMORIAL FUNERAL CHAPEL, #1 Dunmore Road SE, on Monday from 7:00 to 9:00 p.m. and at HOLY FAMILY PARISH, 1451 Strachan Road SE, on Tuesday from 12:00 to 12:55 p.m. Vigil Rites (Prayers) will be said at SAAMIS MEMORIAL FUNERAL CHAPEL on Monday, December 21st, 2015 at 7:00 p.m. The Funeral Mass will be celebrated at HOLY FAMILY PARISH on Tuesday, December 22nd, 2015 at 1:00 p.m. with Father Martin Moser, celebrant. A Private Interment will take place in the Roman Catholic Section at Hillside Cemetery. Memorial gifts in Lena’s memory may be made to Carmel Hospice, St. Joseph’s Home, 156 – 3rd Street NE, Medicine Hat, Alberta, T1A 5M1. Condolences may be sent through www.saamis.com or to condolences@saamis.com subject heading Lena Stroh. Funeral arrangements are entrusted to