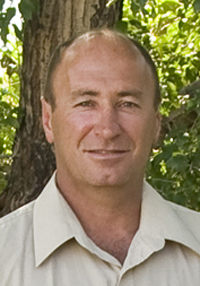 It is with great sorrow and heavy hearts that we announce the sudden passing of Elmer Evan Benson at his home in Dunmore on Monday, December 21, 2015 at the age of 52 years.

The Funeral Service will be held at Knox United Church, 4929 – 50 Avenue, Taber on Tuesday, December 29, 2015 at 2:00 P.M. Burial to follow at the Taber Memorial Garden. Condolences may be forwarded by visiting our website at www.southlandfuneral.com.

Elmer will be met with open arms by his father Harold and his brothers Warren and Craig.

Known to many as “Duke”, Elmer was born in Taber on May 7, 1963. As a young boy, he loved to fish and hunt rabbits. He worked on the rigs and tried other jobs until he moved to Medicine Hat in the late eighties and settled into home exteriors, eventually opening his own business, “Elmer’s Gutters”. He spent many evenings tinkering in his workshop working on his trucks and other projects.

If friends so desire, memorial tributes in Elmer’s name may be made directly to STARS, 1441 Aviation Park NE, PO Box 570, Calgary, Alberta T2E 8M7 (www.stars.ca) or to the Heart and Stroke Foundation of Alberta, Box 2211, Lethbridge, Alberta T1J 4K7 (www.heartandstroke.ab.ca).