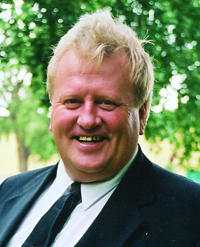 Born and raised in Eastend Saskatchewan. He married Lorraine Bidaux and had five children. He farmed and ranched but his true passion and career path was hockey. He was involved in many levels of hockey from Minor Hockey to the WHL. After Stan and Lorraine divorced he met and married Sherry Scheller.

He passed away suddenly after a short battle with cancer. He is loved by many and will be deeply missed.

Donations to the Cancer Society

One Condolence for “STANLEY ALLAN OLSON”