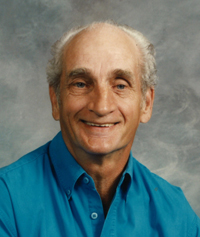 Elwin “Pat” Hugh Hanna, beloved husband of Ethel Hanna of Medicine Hat, passed away on Thursday, December 24th, 2015 at the age of 81 years. Pat also leaves to cherish his memory his five children: Brenda (Jamie) Durkin of Redcliff; Brett Hanna of Medicine Hat; Mark Hanna of Medicine Hat; Terri (Dennis) Mann of Medicine Hat; and Julie (David) Herrmann of Schuler; ten grandchildren: Kayleigh (Brandon) and their children, Rylee and Ryder; Nicole and her children, Jack and Olivia; Anna (Murray) and their children, Gabriel and Hope; Brady; Brianne; Chris (Amy); Justine and her daughter, Lily; Jade (Brendan) and their son, Hudson and a wee one on the way; Amy; and Blair; as well as numerous nieces, nephews, cousins and sisters-in-law. Pat was predeceased by his parents; one brother, Lanny; and one sister, Deonne. Pat was an avid stock car racer for over five decades from the 1950’s to the 90’s both in Medicine Hat and Lethbridge. He also enjoyed golfing, playing pool, and working in his yard. Pat worked for the CP Rail as a locomotive engineer for 35 years and took great pride in his work. In his earlier years, he was an irrigation farmer and began tinkering with cars at an early age. Pat enjoyed travelling and loved animals, but nothing was more important than the time he spent with his family. The Funeral Service will be held at SAAMIS MEMORIAL FUNERAL CHAPEL, #1 Dunmore Road SE, on Wednesday, December 30th, 2015 at 1:00 p.m. with Gary W. Goran officiating. Memorial gifts in Pat’s memory may be made to the SPCA, 55 Southwest Drive SW, Medicine Hat, Alberta, T1A 8E8, or to the Alzheimer’s Society, 201, 770 – 6th Street SW, Medicine Hat, Alberta, T1A 4J6, or to the charity of one’s choice. Condolences may be sent through www.saamis.com or to condolences@saamis.com subject heading Pat Hanna. Funeral arrangements are entrusted to