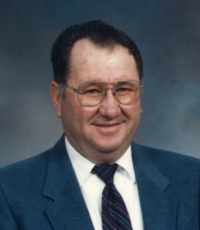 Reverend Harvey Knoblich was called home to be with his Savior on Tuesday, December 29th, 2015 at the age of 84 years. He is survived by his loving wife, Cora (Freimark) of 61 years; his children, Darcey (Karen), Doug (Arlette), Kathy (Fred) Crittenden and Keri (Jason) Ehry; 10 grandchildren; 11 great grandchildren; two sisters, Lila McKenna and Agnes Sommert. Harvey was predeceased by his parents, Emmanuel and Olga (Seitz); and an infant daughter, Linda. Harvey was born and raised on his grandfather’s homestead near Schuler. In 1953 he started his auto mechanics apprenticeship at Amos Motors in Medicine Hat. He met Cora and fell in love and they married in 1954. He felt a call from the Lord to go into the ministry. So together in the fall of 1955 they moved to Camrose where he started Bible School at ABI (Alberta Bible Institute). This started a 40 years ministry within the Church of God, serving churches in Hallonquist, SK, Plum Coulee, MB, Erwood, SK, Barrhead, Medicine Hat and Schuler. During his ministry he was mostly bi-vocational in order to support his family, which was the service he felt the Lord called him to. He worked as a truck driver, plumber, farm hand, auto mechanic, maintenance man/grandpa at the Southview Kiddie Kampus, and finally as a farmer during his ministry at his home church at Schuler. In 2000 Harvey and Cora retired to Medicine Hat, but continued to serve the Lord, leading Bible Studies and any type of ministry to people in need, which continued until his passing. Harvey’s steadfast faith and belief in God saw him through many of life’s challenges, but he was always ready to give thanks for all he had in all things. He greatly enjoyed and was proud of his family. Christmas gatherings with his family were a highlight for him and was looking forward again to the gathering this year, but the Lord decided to call him home instead. We, his family will greatly miss him. “WELL DONE MY GOOD AND FAITHFUL SERVANT”. The Funeral Service will be held at SOUTHVIEW CHURCH OF GOD, 2366 Southview Drive SE, on Monday, January 4th, 2016 at 2:00 p.m. with Dr. Larry Dahl officiating. A Private Interment will take place at Saamis Prairie View Cemetery. Memorial gifts in Harvey’s memory may be made to the Deer Valley Meadows, Box 690, Alix, AB T0C 0B0 or The Gideon’s International, Suite 177, 1415 – 28 Street SE, Medicine Hat, AB T1A 8P9. Condolences may be sent through www.saamis.com or to condolences@saamis.com subject heading Harvey Knoblich. The family graciously requests that those attending the funeral do not wear strong perfume due to allergies. Funeral arrangements are entrusted to