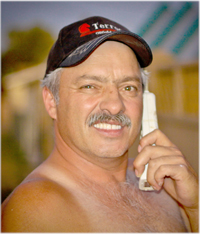 It is with heavy hearts that the family of Jean Louis Lambert announce his sudden passing in Medicine Hat on Monday, December 28, 2015, at the age of 55 years. Jean was born in Edmonton, Alberta on January 18, 1960 and raised in the surrounding areas. He became the man that everyone had loved and adored. Jean had a passion for his family, woodworking and looked forward to working with all of his co-workers. He was always helping others, friends and strangers alike with whatever he could, from lending an ear, a hand or even a couple of dollars. Jean was always there for whoever needed it. He is gone too soon but will always be in our hearts. Jean continues to live on through his mother, Dolores; his loving wife, Katharine; children, Anthony (Kelsie), Daryl (Justine) and Jennifer Lambert; grandchildren, Coda-Jean, Halle, Brody, Lucas, Logan and Owen; siblings, Leo (Donna) Lambert, Louise (Jim) Ells, Roger (Angela) Lambert as well as numerous nieces and nephews. Jean was predeceased by his father, Andre; nephew, Jeff Lambert and numerous aunts and uncles. The Funeral Service will be held at Cook Southland Funeral Chapel, 901 – 13 Street S.W., on Monday, January 4, 2016, at 1:00 p.m. with Reverend Father Philip Le Celebrant. Interment will follow at Hillside Cemetery. (Condolences may be expressed by visiting our website at www.cooksouthland.com) Honoured to serve the family is