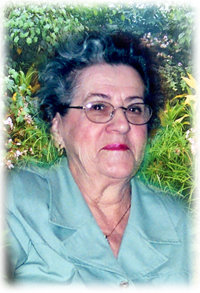 Simone Alphonsine Brassard beloved wife of the late Laurent Brassard, passed away peacefully at the Good Samaritans on Sunday, January 3, 2016, at the age of 94 years. Simone was born in Sherbrooke, Quebec on January 26, 1921, to Donald and Yvonne Fleurent. She married Laurent in Montreal on August 9, 1943. Her Catholic faith was important to her and she lived each day as an example of her belief. To Simone, her family came first, and whatever work Laurent did to support the family, Simone was there 100 of the way. She made numerous beautiful quilts and was an accomplished seamstress making various garments for the family. The summer months found Simone spending countless hours propagating flowers in her greenhouse. Their 40th wedding anniversary celebration in Quebec was an especially memorable occasion they shared with family and friends. Simone enjoyed the running of the sap in late February when it was once again time to make Maple Syrup, Laurent’s retirement project – “a cabane a sucre” (sugar shack). Simone’s memory will be treasured in the hearts of her family: daughter, Lise (Terry) Pederson; grandchildren, Kari Pederson and Travis Pederson; great-grandchildren, Mathew Gagne and Danielle Gagne; sister-in-law, Dolores Bérubé as well as numerous nieces and nephews. The Funeral Mass will be celebrated at St. Patrick’s Roman Catholic Church, 238 – 2 Avenue N.E., Medicine Hat on Friday, January 8, 2016, at 10:30 a.m. with Reverend Father Tomy Manjaly celebrant. Interment will follow at Hillside Cemetery. If friends so desire, memorial donations in Simone’s name may be made directly to a charity of one’s choice. (Condolences may be expressed by visiting our website at www.cooksouthland.com) Honoured to serve the family is