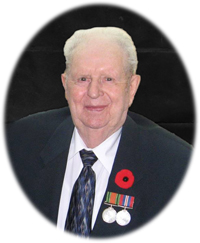 Fred Fauser of Medicine Hat, beloved husband of Ruth (Makus) Fauser for 69 years, passed away on Friday, January 1, 2016 at the age of 95 years. Fred also leaves to cherish his memory his two sons, Stewart (Ruth Ann) Fauser and Greg (Karen) Fauser; five grandchildren, Amanda Borle (Blain) and their children, Hunter and Holden; Sheldon Fauser (Natalie) and their children, Marie, Skylar and Daxan; Aaron Fauser (Andrea) and their daughter, Georgia; Tim Fauser (Melissa) and their daughter, Kylie; and Mark Fauser (Christina), as well as numerous cousins, nieces and nephews. Fred was predeceased by his parents, Andrew and Matilda Fauser; and four sisters. Fred was born on April 27, 1920 in Golden Prairie, Saskatchewan. In 1942, Fred was called into the army where he spent four years serving in Canada and Europe, being discharged in Spring 1946. Fred and Ruth were married on September 28, 1946 after a seven year courtship. Together they made their home in Medicine Hat. Fred worked for the Brick and Tile for four and a half years before starting a 34 year career with the Canadian Pacific Railway, retiring in March 1985. Fred was actively involved in many things including helping while his sons who were involved with the Boy Scouts and the church Boys Club. Fred thoroughly enjoyed his retirement years where he was able to spend more time hunting, fishing and sports. The Funeral Service will be held at WUERFEL AUDITORIUM, 1720 Bell Street SW, on Saturday, January 9, 2016 at 2:00 p.m. with Pastor John Enns and Pastor Bob Findley co-officiating. A private interment will take place at Hillside Cemetery. In lieu of flowers, memorial gifts in Fred’s memory may be made to the chapel at South Country Village, 1720 Bell Street SW, Medicine Hat, Alberta, T1A 5G1. Condolences may be sent through www.saamis.com or to condolences@saamis.com with Fred Fauser in the subject heading. Funeral arrangements are entrusted to