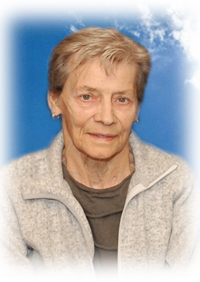 Maria Irma Eva Pomreinke passed away peacefully surrounded by her family at the Medicine Hat Regional Hospital on Friday, January 8, 2016, at the age of 75 years. Mary was born in Budapest, Hungary on December 15, 1940, to Michael and Maria Kueller (nee Rapolda). Mary married Herbert on February 17, 1958 in Maple Creek, SK. and moved to Leader, SK. in 1964. In 1970, they moved to Medicine Hat where she was a stay at home mom until entering the work force in 1984. She retired in 2005 from the Medicine Hat Lodge. Mary was a generous, kind, humorous, stubborn, compassionate, caring and patriotic woman – a true Canadian. She loved spending time with her family (kids and grandkids), gardening, needlepoint and playing bingo, cards, crib, crokinole and parcheesi. Mary loved watching her children and grandchildren in whatever sports they participated in and was an avid supporter of Team Canada and the Toronto Blue Jays. Her most memorable occasions were those spent with family, whether that was birthdays, graduations or weddings as well as every Christmas together. Her greatest achievements were receiving her driver’s license and her family – raising five children on a shoe string budget and loving and supporting them always. Mary leaves to cherish her memory: five children, Robert (Anne) Pomreinke, Harvey (Wendy) Pomreinke, Arnold Pomreinke, Susan Pomreinke and Richard (Buffy) Pomreinke; nine grandchildren: Derek (Amanda), Sheldon (Shandra), Clayton (Leya), Matthew, Jessica (Mitch), Haley (Rylan), Madison (Bryson), Tyeson and Taylor; one brother, Stefan Kueller and one sister, Rose Morfitt as well as numerous nieces, nephews and extended family. She was predeceased by her husband, Herbert Pomreinke in 1989; parents, Michael and Maria Kueller and brother, Michael. Those wishing to pay their respects may do so at Cook Southland Funeral Chapel, 901 – 13 Street S.W., Medicine Hat on Wednesday, January 13, 2016, between 7:00 p.m. and 8:00 p.m. as well as on Thursday, January 14, 2016, starting one hour prior to the Service. A Celebration of Mary’s life will be held at Victory Lutheran Church, 2793 Southview Drive S.E., Medicine Hat on Thursday at 1:00 p.m. with Diaconal Minister Lila de Waal officiating with a private family Interment at Hillside Cemetery. (Condolences may be expressed by visiting www.cooksouthland.com) If friends so desire, memorial donations in Mary’s name may be made directly to the Alberta Lung Association, P.O. Box 4700 Stn. South, Edmonton, Alberta, T6E 9Z9; the Canadian Cancer Society, 102 Crestwood Square One, 1865 Dunmore Road S.E., Medicine Hat, Alberta, T1A 1Z8. Honoured to serve the family is
Cook Southland Funeral Chapel, 901 – 13th Street S.W. Medicine Hat, Alberta T1A 4V4 Phone 403-527-6455