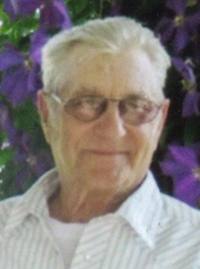 Eugene Edward Rabb of Endiang, beloved husband of Gloria Rabb, passed away on Saturday, January 9th, 2016 at the age of 80 years. Eugene also leaves to cherish his memory his children, Randy (Cheryl) Rabb, Stacy Rabb, both of Medicine Hat, Renee (Chris) Wirsch of Airdrie, and Nadine (Mark) Shelstad of Grande Prairie; thirteen grandchildren; and eleven great-grandchildren. Eugene was predeceased by his parents, Edward and Olga Rabb; and one son, Kelly Rabb. Eugene farmed with his parents in the Little Plume area. He married Gloria on November 7th, 1958 in Medicine Hat and they moved to his uncle’s farm for three years before relocating to Eckville where they farmed for six years. Eugene and Gloria eventually settled in Medicine Hat where Eugene started working in the oilfield. They retired in Endiang where Eugene found his passion for wood working. Eugene was a very social person who loved people and especially loved spending time with his children and grandchildren. Those wishing to pay their respects may do so at SAAMIS MEMORIAL FUNERAL CHAPEL, #1 Dunmore Road SE, on Wednesday from 7:00 to 9:00 p.m. A Private Funeral Service will be held at SAAMIS MEMORIAL FUNERAL CHAPEL on Thursday, January 14th, 2016 with Gary W. Goran officiating. A Private Interment will follow at Hillside Cemetery. Memorial gifts in Eugene’s memory may be made to the Alberta Heart and Stroke Foundation, #124, 430 – 6th Avenue SE, Medicine Hat, Alberta, T1A 2S8. Condolences may be sent through www.saamis.com or to condolences@saamis.com subject heading Eugene Rabb. Funeral arrangements are entrusted to