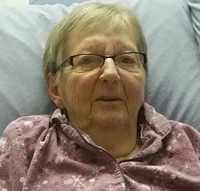 Elizabeth “Betty” Rose Berger of Medicine Hat, beloved wife of the late Frank Berger, passed away on Thursday, January 7th, 2016 at the age of 77 years. Betty leaves to cherish her memory three sons, Richard Berger, Kevin (Wanda) Berger, and Brian (Annette) Berger; one daughter, Kathleen (Steve) Murphy; twelve grandchildren; numerous great-grandchildren; as well as numerous nieces and nephews. Betty was predeceased by her husband, Frank; and her parents, Michael and Anna Marie Rissling. Betty was born in Prelate, Saskatchewan and was raised on the farm. She married Frank Berger and they lived on the farm south of Prelate before moving to Sceptre where they raised their children. Betty loved gardening, cooking, watching game shows, doing puzzles, curling, and playing shuffle board. In 2013, Betty moved to Medicine Hat where she made many friends at the Retirement Villa. The Funeral Service will be held at SAAMIS MEMORIAL FUNERAL CHAPEL, #1 Dunmore Road SE, on Saturday, January 16th, 2016 at 2:00 p.m. with Father Philip Le officiating. Interment will take place at a later date in Prelate. Memorial gifts in Betty’s memory may be made to the Alberta Heart & Stroke Foundation, #124, 430 – 6th Avenue SE, Medicine Hat, Alberta, T1A 2S8. Condolences may be sent through www.saamis.com or to condolences@saamis.com subject heading Betty Berger. Funeral arrangements are entrusted to