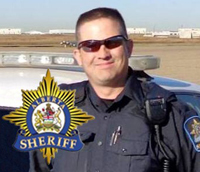 It is with great sorrow that the family of Sheriff Christopher Gerbrandt announce his sudden passing on Saturday, December 12, 2015, at the age of 46 years. Chris was born in Ottawa, Ontario on September 14, 1969. At the age of 12, Chris joined the army cadets, and later enlisted with the Canadian Armed Forces in 1987. Chris continued his military involvement as a Captain with the army cadets, which he loved and actively participated in until the time of his passing. He also worked with Calgary Transit for 13 years. Chris began his career with the Alberta Sheriffs in 2008, and was posted to Medicine Hat where he primarily served at the local court house. Chris had a passion for photography, and most evenings and weekends were spent taking photographs of sports teams and players, cadets, and other special events. Chris was also a proud member, and the club photographer for the Medicine Hat Burns Club.

He is gone too soon but will always be in our hearts. Survived by his loving wife, Kimberly; sons, Kyle and Kolten; parents, Gary and Norma Hurst of Calgary; brothers, Robert (Bonnie) of Barrie, Ontario, and Michael of Vilna, Alberta; nephew, Gary; and many more family members and friends. Chris was predeceased by his father, David Gerbrandt on March 26, 2000.

A Celebration of Chris’s Life will be held at the ESPLANADE ARTS & HERITAGE CENTRE, 401 – 1st Street SE, on Saturday, February 6, 2016 at 2:00 p.m. Memorial donations in Chris’s memory may be made to the Military Families Fund, by accessing the following website –

https://www.cfmws.com/en/SupportOurTroops/DonateNow/Pages/default.aspx. Condolences may be sent through www.saamis.com or to condolences@saamis.com subject heading Chris Gerbrandt. Funeral arrangements are entrusted to