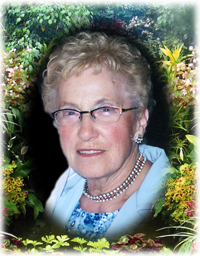 1923 ~ 2016
Viola Catherine Gill, (nee Brady) beloved wife, mother and friend, passed away peacefully on Wednesday, January 13, 2016, at the age of 92 years. Viola is survived by her sons, Marvin (Elaine) and Lynden and was predeceased by her husband, Herbert, her parents, Elizabeth and Carl Brady and her sister, Adelaide Dahlke. Viola was born in Cabri, Saskatchewan on June 5, 1923, but grew up on the family farm near Lemsford. She met her husband, Herbert at a social that was held at the Brady farm and they were married on November 8, 1945. Herb and Vi lived in Leader for 12 years until 1957 when they moved to Medicine Hat where they long distance farmed until 1991. Those wishing to pay their respects may do so at Cook Southland Funeral Chapel, 901 – 13 Street S.W. on Monday, January 18, 2016, from 10:00 a.m. to 10:45 a.m. with a Graveside Service following at Hillside Cemetery at 11:00 a.m. The Memorial Service will be held at Christ the King Assembly, 1101 Queen Street S.E., Medicine Hat on Monday at 1:00 p.m. with Reverend Mark Borrows officiating. (Condolences may be expressed by visiting our website at www.cook southland.com) If friends so desire, memorial donations in Vi’s name may be made directly to World Vision, 1 World Drive, Mississauga, Ontario, L5T 2Y4. Honoured to serve the family is