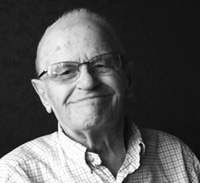 John was born in Bellis, Alberta. His early years were spent on the farm working alongside his family. In 1943 John enrolled in the Canadian Army as a cook. Then, in 1951-53 he served in Korea with The Royal Canadian Army Service Corps as a Transport Driver. Motor mechanics has always been an interest. John enjoyed working various construction and mechanical jobs in between assignments. After retiring from service and while holding a full-time job to take care of his family, John earned his First Class Power Engineering diploma through SAIT. He joined Amerada Minerals at the Olds Sulphur Plant, where he worked from 1965-1990. John loved his job, made great friends and retired at the pinnacle of Chief Power Engineer. John met his wife, Edna in 1946 at Currie Barracks in Calgary and on May 15, 1948 they exchanged vows to start a journe together that would last 58 years. John and Edna loved road trips. Their furthest was to Texas and their best were with their family. John enjoyed meeting people and was ready to chat anytime. He loved his pets, fishing, camping and sports, especially when his children and grandchildren participated. As a hockey dad, goal judge for many years, Bantam league governor and huge fan he supported minor hockey in a major way. John loved his life and approached it with kindness, patience and a smile. Most of all John loved his family and was incredibly proud of them and their accomplishments. He always made them his first priority.

He will be forever missed and remembered in the hearts of his sons and daughters-in-law Raymond, John and Michele, Alexander and Candace; daughters and sons-in-law Victoria and Norman, Carrie, and Gwen and Lanny; grandchildren Daryl (Colette), Chad (Catherine), Corey, Laurel, Brandon, Curtis, and Jordan; great-grandchildren Celine, Sophie, Cale, Cole, and Cyle; and brother Metro.

A Private Graveside Service will be at Queen’s Park Cemetery. Please forward condolences through www.calgarycrematorium.com

We extend our sincerest gratitude to the caring staff of Newport Harbour Care Centre, who cared for Dad as they would a family member.