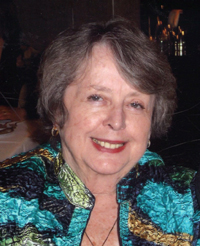 Elizabeth “Betty” Horsman, beloved wife of James “Jim” Horsman of Medicine Hat, passed away on Friday, January 22nd, 2016 at the age of 76 years. Betty also leaves to cherish her memory three daughters, Cathy (Grant Schaber) Horsman, Diana (Trevor) Nakka, and Susan (Troy) Thieman; and nine grandchildren, Matt, Ben, Megan, Rachel, Nate, Clark, Whitney, Emily and Jackson. She is also survived by cousins and their families in England. Betty was predeceased by her parents, Thompson and Marian Whitney. Betty was born in Bassano on July 18th, 1939 and was raised on the Whitney Pioneer Ranch and in Ralston. After graduating from Medicine Hat High School, Betty attended the University of Alberta where she earned her B.Ed. After graduating university, Betty taught school in the Medicine Hat School District #76. She met her future husband, Jim, on a blind date. It was the first, and last, blind date for both of them. They were married on July 4th, 1964 and their marriage of over 50 years is a tribute to their love. Throughout their marriage, Betty shared Jim’s passion and commitment to public service during his five terms as MLA for Medicine Hat and upon retirement, as Chancellor of the University of Lethbridge. As a teacher of Math, Science, and French in the Medicine Hat School District #76 for 16 years, she inspired many students. She taught at AJHS from 1960 to 1966 and after raising her three beautiful daughters, she returned to teaching from 1983 to 1993 at CHHS. An active volunteer in the community, Betty was President of the Kinettes, volunteered in the ESL Program at Hat High, was Treasurer of the WOC at St. John’s Presbyterian Church, and served for many years on the Executive of the local Progressive Conservative Association. A charter member of the local Chapter J of the P.E.O., she recently resumed her active membership. She also appreciated her meetings with the Medicine Hat Retired Teachers Association. Betty enjoyed travelling, gardening, reading and needlework. Not only was she an admirer of art with an impressive collection, Betty was also a talented painter herself. She was known as a woman of taste, whose elegant wardrobe and bright smile were her hallmarks. She truly loved the company of her family and friends, especially looking after her grandchildren. Her Kinettes, Kinsmen, and teaching friendships have been constant throughout the years. She cared lovingly for her many dogs and cats who held a special place in her heart. Betty will be missed greatly and remembered fondly by all those who knew and loved her.

“And I shall hear, tho’ soft

you tread above me

And all my dreams will

warm and sweeter be

If you’ll not fail to tell me

that you love me

until you come to me.”

Those wishing to pay their respects may do so at SAAMIS MEMORIAL FUNERAL CHAPEL, #1 Dunmore Road SE, on Thursday from 7:00 to 9:00 p.m. The Funeral Service will be held at ST. JOHN’S PRESBYTERIAN CHURCH, 504 – 2nd Street SE, on Friday, January 29th, 2016 at 11:00 a.m. with Reverend Dr. Nancy Cocks and Dr. David J. Carter co-officiating. Interment will take place at St. Margaret’s Cemetery. Memorial gifts in Betty’s memory may be made to the SPCA, 55 Southwest Drive SW, Medicine Hat, Alberta, T1A 8E8, or to the charity of one’s choice. Condolences may be sent through www.saamis.com or to condolences@saamis.com subject heading Betty Horsman. Funeral arrangements are entrusted to