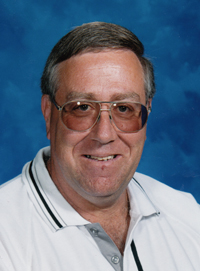 It is with great sadness that we announce the passing of our husband, father, and grandfather LAWRENCE ROBERT BAKER on January 24th, 2016.

He was predeceased by his parents George and Renee Baker and is survived by his wife Marilyn, his daughters Jaylene and Jodi, his 4 grandchildren Kristen, Cassidy and Cayley Fournier, and Jayden Baker, and by his brother and sister Raymond Baker and Arianne Baker.

Lawrence was born and raised in Medicine Hat and moved to Lethbridge in 1972 to attend the University of Lethbridge after 3 years at the Medicine Hat College. He played basketball for the Rattlers and the Horns and was a fierce inside competitor earning him the nickname Ox. He taught and coached for over 30 years in Lethbridge until his retirement. He enjoyed Men’s slow pitch, competing in the World Senior’s Games for 19 years.

There will be no public funeral services by his request. In lieu of flowers, please consider a donation to The Cancer Society or to Jumpstart and/or Kidsport so his legacy of helping athletes may continue on.

Leave a Condolence for Sharlene Getz