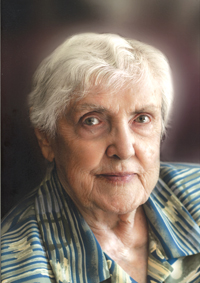 Rose Marie Frederick (nee Bonogofsky) of Medicine Hat, beloved wife of the late Emil Frederick, passed away on Tuesday, January 26th, 2016 at the age of 90 years. She leaves to cherish her memory one son, Garry Garrecht of Medicine Hat; two daughters, Karen Mali of Medicine Hat and Carol (Mike) Nay of Apex, North Carolina; five grandchildren, Perveen, Anita and Kevin Mali and Kyle and Nicole Nay; one sister, Theresa (Bill) Weisgerber; three step-children, Raymond (Dorothy) Frederick, Betty (Don) Earl and Marlene (Errol) Renn and their families, grandchildren and great grandchildren; as well as numerous nieces and nephews. She was predeceased by her first husband, Edward Garrecht; her daughter, Diane Garrecht on January 26th, 2006; her parents, Max and Mary Bonogofsky; five brothers, Bill, Joe, Val, John and Pete; and one sister, Francis Biko. Rose was born on May 13th, 1925 on the family farm in Prelate, Saskatchewan where she was raised and educated. She married Edward on October 3rd, 1944 at Liebenthal, Saskatchewan. Together they moved to Medicine Hat shortly before moving to Taber, returning to Medicine Hat in the early 1960’s. After Edward’s passing Rose continued to live in Medicine Hat. She met and married Emil Frederick on March 14th, 1975. Rose enjoyed gardening, knitting and crocheting. She enjoyed baking for her family and the company of her family and friends and will be missed dearly by them. Those wishing to pay their respects may do so at SAAMIS MEMORIAL FUNERAL CHAPEL, 1 Dunmore Road SE, on Friday from 7:00 until 9:00 p.m. and at HOLY FAMILY PARISH, 1451 Strachan Road SE, on Saturday from 11:00 until 11:55 a.m. Vigil Rites (Prayers) will be held at SAAMIS MEMORIAL FUNERAL CHAPEL on Friday, January 29th, 2016 at 7:30 p.m. The Funeral Mass will be celebrated at HOLY FAMILY PARISH, on Saturday, January 30th, 2016 at 12:00 p.m. with Father Philip Le, celebrant. Interment will follow in the Roman Catholic Section at Hillside Cemetery. Memorial gifts in Rose’s memory may be made to Alberta Heart & Stroke Foundation, 124, 430 – 6th Avenue SE, Medicine Hat, Alberta, T1A 2S8. Condolences may be sent through www.saamis.com or to condolences@saamis.com subject heading Rose Frederick. Funeral arrangements are entrusted to