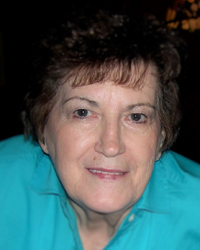 Ruth Purvis of Medicine Hat, beloved wife of the late John Purvis, passed away on Tuesday, January 26th, 2016 at the age of 79 years. Ruth leaves to cherish her memory her one son, Noel (Janelle) Purvis of Medicine Hat; three daughters, Belinda (Darrin) Dominique of Sudbury, Ontario, Carmen Carry (Blaine Sweet) of Okotoks, and Noreen (Greg) Enslen of Edmonton; seven grandchildren, Cullen, Alyssa, Genevieve, Lauren, Noah, Aiden, and Payton; two brothers, Don (Joan) Horban and Jim (Jean) Horban; four sisters, Anne Strobel, Elizabeth Holton, Esther (Terry) Williams, and Irene (Al) Beaudoin; as well as numerous nieces and nephews. Ruth was predeceased by her husband, John; her parents, Paul and Olga Horban; one brother, Joe Horban; and two sisters, Mary Horban and Judy Murray. Ruth was born on July 13th, 1936 in Franchere, Alberta where she received her education. She moved to Edmonton where she met John and they were married on July 11th, 1959 in Edmonton. John and Ruth moved to Kerrobert, Saskatchewan where they ran the family farm. In 1991, they relocated to Medicine Hat where Ruth worked as a cook, retiring in 2000. Ruth loved her grandchildren and spending time with her family. She will be greatly missed and lovingly remembered by all. Those wishing to pay their respects may do so at SAAMIS MEMORIAL FUNERAL CHAPEL, #1 Dunmore Road SE, on Friday from 7:00 to 9:00 p.m. and on Saturday from 10:00 a.m. to 3:55 p.m. The Funeral Service will be held at SAAMIS MEMORIAL FUNERAL CHAPEL on Saturday, January 30th, 2016 at 4:00 p.m. with Pastor Larry Enslen officiating. Interment will take place in the family plot at Hillside Cemetery. Memorial gifts in Ruth’s memory may be made to the Alzheimer’s Society of Alberta, 10531 Kingsway Avenue, Edmonton, Alberta, T5H 4K1. Condolences may be sent through www.saamis.com or to condolences@saamis.com subject heading Ruth Purvis. Funeral arrangements are entrusted to