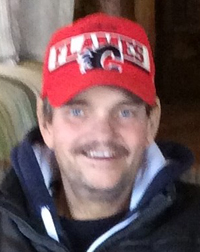 Steven “Steve” Michael Murphy of Medicine Hat, passed away peacefully with his wife and loved ones by his side on Tuesday, January 26th, 2016 at the age of 54 years. Steve leaves to cherish his memory his wife, Kat Murphy; his son, Mitchell (Crystal) Armstrong; his daughters, Chantille Armstrong, Amanda Armstrong (Coree Paskaluk), and Tiffiny Armstrong; two grandchildren, Lilly Armstrong and Kali Paskaluk; his mother, Clara Murphy; two brothers, Patrick (Bernadette) Murphy and Jerry (Jackie) Murphy; one sister, Regena (Daniel) Merkley; four nephews, Kyle (KJ) Murphy, Braden (Robynne) Murphy, Stuart Murphy and Jeff Murphy; and one niece, Katlyn Merkley. Steve was predeceased by his father, Leo Murphy. Steve was a man with a big heart who was always willing to help others. He also had a great sense of humor. Steve was a successful entrepreneur with big ambitions. He loved camping and quading, especially in the mountains, travelling and golfing. The Medicine Hat Tigers were his favorite sports team. Steve loved his family and truly enjoyed the time he spent with them, especially his grandchildren. The Funeral Mass will be celebrated at HOLY FAMILY PARISH, 1451 Strachan Road SE, on Monday, February 1st, 2016 at 1:00 p.m. Memorial gifts in Steve’s memory may be made to the Canadian Liver Foundation, Suite 309, 1010 – 1st Avenue NE, Calgary, Alberta, T2E 7W7. Condolences may be sent through www.saamis.com or to condolences@saamis.com subject heading Steve Murphy. Funeral arrangements are entrusted to