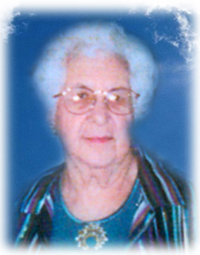 Anne J. Wohlgemuth, beloved wife of the late Ernst A. Wohlgemuth, passed away peacefully at the Medicine Hat Regional Hospital on January 26, 2016, at the age of 98 years. Anne was born in Altona, MB. on June 21, 1917, to Jacob and Katherine Harder. Upon graduating from Grade 12, she worked part-time at the Co-op store and printery. Anne left for Winnipeg where she did menial jobs until she started working as a switchboard operator in the Defense Industry during the war. Later she was hired by the CPR at the Royal Alexandra Hotel as a switchboard operator for 19 and a half years. Anne lived in Winnipeg and Gimli, MB.; Vancouver, B.C.; Union, Ontario and finally settled in Medicine Hat until her passing. Anne’s first marriage was to Stanley Hammond from 1946-1949 right after the WWII, of which time he spent 14 months in Deer Lodge Hospital in Winnipeg before his passing. Anne’s second marriage to Sidney Cox, RCAF in Gimli, Manitoba. He was killed in a car accident in Saskatchewan, which also left Anne seriously injured as she spent seven weeks in Midale Hospital recovering. She had been widowed for 13 years before marrying, William G. Marriott, and were together for 33 years. After Bill’s passing, Anne remained widowed until her marriage to her childhood sweetheart, Ernst on April 19, 2004. They were the happiest together until Ernst’s passing in 2010. Anne is survived by her step family; Joan Mason and her son, Richard; daughter-in-law, Carole Marriott and her family; Leigh Anne, Cathy, Candy, Bill Jr., Crystal and their families and her many great-grandchildren. Anne was predeceased by her parents, Jacob and Katherine; two brothers, Frank and Dave; three sisters, Eva, Tien and Mary; step-son, Bill Marriott and step-granddaughter, Lisa Haag. Anne had many nieces who were very dear to her, especially, Sharon, Louise, Maureen and Suzanne. She knit all of them baby outfits and much more. A Celebration of Anne’s life will be held at Cook Southland Funeral Chapel, 901 – 13th Street S.W., Medicine Hat, on Wednesday, February 3, 2016, at 10:00 a.m., with Pastor Lance Duncalfe officiating. Interment will follow at Hillside Cemetery along side her husband Ernie. If friends so desire, memorial tributes in memory of Anne’s may be made to a charity of one’s choice. (Condolences may be expressed by visiting our website at www.cooksouthland.com) Honoured to serve the family is