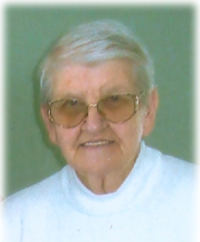 Mrs. Ruth Evelyn Friesen, beloved wife of Abram Friesen, passed away peacefully at the Medicine Hat Regional Hospital on Tuesday, January 26, 2016, at the age of 83 years. Ruth was born July 29, 1932, in Stonewall, Manitoba. She was born one of four children to Ludwig and Bertha Gross. Ruth married Abram on April 25, 1952, in Winnipeg and celebrated 63 years of marriage. Throughout the years they resided in many communities before finally settling in Medicine Hat. Ruth was quiet in nature and enjoyed going to bingo, cross-stitch and knitting, in which she had a knack for making doll clothes. Ruth was a devoted lady to her husband, Abram and her family. She will be remembered by Abram; children and grandchildren: Wayne Friesen and his son, Thomas; Rae Kunze (Hank) and family, Cindy (James) Gibbons, Christine (Dennis) Kovacic, Chartotte (Walter) Mandel and Carolynne (Steve) Wolfe; Wendy Hrenyk (Vern) and their family, Jody (Blayne) Levesque, Kristy (Bob) Jones and Amy Hrenyk (Steve Grant); Brian Friesen and his children, Kellie, Karla, Megan and Jake Friesen; Larry Friesen; 16 great-grandchildren and a sister, Elsie Kenning. Ruth was predeceased by her parents, Ludwig & Bertha Gross; a son-in-law, Dietmar Kunze two brothers, Fred Gross and Walter Gross and a brother-in-law, Jake Kenning. Ruth’s life will be silently remembered by her family and friends. (Condolences may be expressed by visiting our website at www.cooksouthland.com) Memorial donations in Ruth’s name may be made directly to South Country Village, 1720 Bell Street S.W., Medicine Hat, Alberta, T1A 5G1. Honoured to serve the family is

One Condolence for “RUTH FRIESEN”

Leave a Condolence for Victoria Cosby