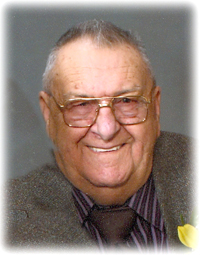 It is with heavy hearts that the family of Felix Lutz, beloved husband of Thelma Lutz, announce his passing at the Medicine Hat Regional Hospital on Monday, February 1, 2016, at the age of 82 years. He was born and raised in Prelate, SK., where he went to school up to the eighth grade. Felix married the love of his life, Thelma Heine on February 25, 1961, at St. Paul Lutheran Church in Medicine Hat. He was a dedicated employee with the Medicine Hat Fire Department as a Firefighter, retiring after 31 years of service as a Lieutenant. Felix was a compassionate, kind and caring friend and family man. His family was always his first priority being the best husband, father and grandpa he could be. Family vacations and gatherings were important to Felix as well as his bowling league, watching hockey, curling and football on TV and gardening… keeping the deer out of the garden was his mission! He was a member of the Royal Canadian Legion and enjoyed his time during various activities there. Felix will be lovingly remembered by his dear wife, Thelma; children, Pam (Martin) Crook and their children Stephanie, Samantha (Bradyn); Darcy (Talya) Lutz; Karen Lutz; siblings, Irene (Clifford) Beisel, Bernice Bleile, Violet Milbrandt; brother and sister-in-law, Doug and Shirley Heine as well as numerous aunts, uncles, nieces, nephews, cousins and friends. Felix was predeceased by his parents, Joseph and Mary; brother, Richard; in-laws, Rudolph and Rose Heine; sister-in-law, Margaret (Armin) Rehbein and brother-in-law, Fred Bleile. Those wishing to pay their respects may do so at Cook Southland Funeral Chapel, 901 – 13 Street S.W., Medicine Hat one hour prior to the service. The Funeral Service will be held at Cook Southland Funeral Chapel on Thursday, February 4, 2016, at 11:00 a.m. with Pastor Ken Edel officiating. Interment will follow at Hillside Cemetery. (Condolences may be expressed by visiting our website at www.cooksouth land.com) In lieu of flowers, memorial tributes in Felix’s name may be made directly to the Heart & Stroke Foundation of Alberta, 124, 430 – 6th Ave. S.E., Medicine Hat, Alberta, T1A 2S8 or to the Renal Program, c/o the Medicine Hat & District Health Foundation, 666 – 5th Street S.W., Medicine Hat, Alberta, T1A 4H6. Honoured to serve the family is