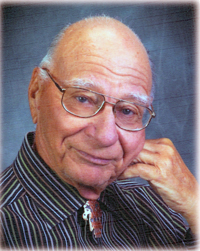 It is with sadness that we announce the passing of our beloved husband, dad, and granddad. Garfield (Garry) Potvin passed away while surrounded by his family at the Carmel Hospice on Tuesday, January 26, 2016, at the age of 87 years. Left to cherish Garfield’s memory is his wife, Violet; his three children, Ellen, Greg (Linda) and Lois (William) Gibson and five grandchildren, Jarrett, Aidan, Alycia, Robert and Jane. He will also be lovingly remembered by Violet’s children, Jeff (Tara), Winston (Michelle), Brian (Ardis) and Cheryl Braund and their children, Kaleigh, Kole, Karson, Jordan, Cody, Josh, Richard, Michael and Thomas; brother, Bill and his family; Vi’s siblings and their families as well as Jack and Donna Brooke and family. Garfield was predeceased by his parents, Wilfred and Sophia Potvin; his first wife, Marlene as well as his son-in-law, Ross Kidd. Garry and his brother Bill were raised on the family farm near Islay. His early education was at Trimbleville, Kitscoty and Vermilion and he went on to earn his Bachelor and Master Degrees of Education. Garry was always an educator and his teaching career took him from the classroom, to Principalships, to Superintendent of Schools. Garry enjoyed discussing and debating politics, playing cards, going out for coffee, golfing, curling, square dancing and playing pool. He was a loyal member of the Golden K Kiwanis Club. The annual Potvin reunion was the highlight of his summers. Garry was humble, kind, loving, generous and inquisitive with his friends and family and he always enjoyed visiting. He was proud of all the grandchildren and attended their graduations and sporting events. He taught honour, respect and values. In 1962, Garry married Marlene Brooke, and together they had three children, Ellen, Greg and Lois. Marlene passed away in 1990. Garry married Violet McArthur in 2001, mother of Jeff, Winston, Brian and Cheryl. Due to his ailing health, he enjoyed traveling to Victoria in the winter to escape the Alberta cold. The Celebration of Garfield’s Life will be held at Victory Lutheran Church, 2793 Southview Drive S.E., Medicine Hat on Saturday, February 13, 2016, at 1:00 p.m. with Pastor Jim Bredeson and Diaconal Minister Lila de Waal officiating. Prior to the service, Private Interment will take place at Hillside Cemetery. (Condolences may be expressed by visiting our website at www.cooksouthland.com) Those wishing to remember Garfield may do so through a donation to the St. Joseph’s Home – Carmel Hospice, 156 – 3 Street N.E., Medicine Hat, Alberta, T1A 5M1 or to the Margery E. Yuill Cancer Centre (Make donation payable to the Medicine Hat &â€ˆDistrict Health Foundation with a note that the donation if for the Margery E. Yuill Cancer Centre), 666 – 5 Street S.W., Medicine Hat, Alberta, T1A 4H6. Honoured to serve the family is