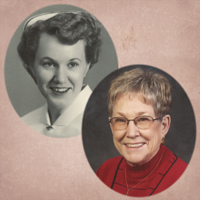 Bobryk/Provencher – nee Keeler – Janice Audrey, aged 86, beloved Mother, Grandmother, Great Grandmother, Sister, Aunt, and Friend passed away peacefully on February 8th, 2016 in Edmonton, Alberta. Jan was born on January 8th, 1930 in Waldeck, Saskatchewan and attended school there, as well as Swift Current, Saskatchewan. She graduated from the Medicine Hat General Hospital School of Nursing as a Registered Nurse in 1952 and worked in Swift Current, and Saskatoon, Saskatchewan, Flin Flon, Manitoba and retired from the Medicine Hat Regional Hospital in 1989. Janice was an outstanding nurse and attained the position of Head Nurse for the Women’s Surgical Unit at the pinnacle of her career.

As well as her nursing duties, Jan also found time for her volunteer work such as the CWL (Catholic Women’s League), Member of the Legion Ladies Auxillary, or working at the “Post Thrift Store” in Medicine Hat. She was a generous and caring woman who gladly donated her time to help others. She was also interested in playing Bridge and Scrabble, sewing, quilting, and knitting,

But Janice’s greatest accomplishment was raising her five children. Her heartfelt wish was that she had done a good job of being a parent and guardian, and that they were successful in their lives and careers. She instilled a purpose to attain higher education in them and that is clearly evident in all their accomplishments. She also believed that you had to give back to not only your community, but also your country.

She is survived by her son, Donald Provencher (wife Chris) and their children Chelsea and Cody of Calgary, Alberta; son, Ernie Provencher (wife Christine) and their sons Nicholas (Ashley) and Marc (Jamie) of Sherwood Park, Alberta as well as great granddaughter Heidi; daughter, Michelle Neitz (husband Harlan) and their children Brody and Juanita of Medicine Hat, Alberta; daughter, Lisa Scott of Houston, Texas and her children Jessica, Alexandra, and Brenden.

She is survived also by sisters, Mary Wells of Maple Creek, Saskatchewan, Dorothy Duthie of Swift Current, Saskatchewan, and Margaret “Peggy” Hamilton (husband Gerald) of Medicine Hat, Alberta. She will also be missed by many special nieces and nephews. Janice was predeceased by one son, David Provencher; one granddaughter, Angela Marie Neitz; as well as her brother, Arthur, and sisters, May and Olive.

She was the rock of our family and a pillar of strength in her determination for a better future for her family. We will miss her laugh and humor and especially the “twitch” of her nose. God bless her on her next journey.

As an expression of sympathy, donations may be made to the Canadian Diabetes Association, 102, 73 – 7th Street SE, Medicine Hat, Alberta, T1A 1J2, or to Habitat for Humanity Southern Alberta, #210 – 805 Manning Rd NE, Calgary, Alberta, T2E 7M8. Condolences may be sent through www.saamis.com or to condolences@saamis.com subject heading Jan Bobryk. Funeral arrangements are entrusted to