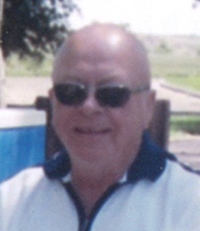 James Edward Coulter of Medicine Hat, beloved husband of the late Adeline “Addie” Coulter, passed away on Wednesday, February 10th, 2016 at the age of 75 years. Jim leaves to cherish his memory his two brothers, Bill (June) Coulter and Bob (Jean) Coulter; one sister, Marilyn (Robert) Good; brother-in-law, Edward Runstedler; sisters-in-law, Mary, Kay, and Merlene; nephews, Doug (Shelley) Nagel and Jody (Keith) Wittig; numerous nieces and nephews and great-nieces and great-nephews; and special friends, Al (Sherry) Larter. Jim was predeceased by his wife, Addie; his parents, Roy and Mary Coulter; his father and mother-in-law, Carl (Eva) Bigler; one sister, Margaret Runstedler; two brothers-in-law, John and Tony; and three sisters-in-law, Lorraine, Fran and Agnes. Jim grew up in Milverton, Ontario and moved west as a young man where he met his wife. Jim married Addie in 1964 and they resided in Calgary for 35 years where he drove taxi. He relocated to Medicine Hat to semi-retire after his wife’s passing and returned to driving taxi. Jim was an avid bowler in Calgary and Medicine Hat. He also enjoyed golfing, goose hunting with his father-in-law, and most sports including hockey, football and fastball. He was a big fan of the Calgary Flames and Stampeders. Jim had a love for animals and always had pets at home. He was a very independent man and a perfectionist. Jim will be greatly missed and lovingly remembered by his family and friends. At Jim’s request, there will be no funeral service. Please visit www.saamis.com to view photos of Jim’s life. Memorial gifts in Jim’s memory may be made to the Rosedale Hospice, 920 – 7A Street NW, Calgary, Alberta, T2M 3J4, or to Save Old Souls, PO Box 272, Redcliff, Alberta, T0J 2P0. Condolences may be sent through www.saamis.com or to condolences@saamis.com subject heading Jim Coulter. Funeral arrangements are entrusted to