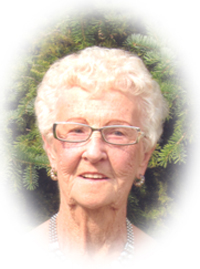 Bernice was born in the Eastend district on March 4, 1924. She was raised in the Jumbo Butte district where she attended school. Bernice began working on the family farm and then went to work at the Bank of Montreal in Eastend. She married Lucien Breton on December 13, 1947 at the Catholic Rectory in Eastend. Following several years of travelling around to find work they returned to the Eastend area to farm. In 1953 they settled on Joe Wold’s farm for two years before moving to Bill Miller’s farm, renting it for several years before buying it in 1964. Bernice went back to work for the Bank of Montreal in Eastend, overall working there for fifteen years. She also worked at the post office and for various places in Eastend. Bernice and Lucien continued to farm until retiring in 1982 and moved to Medicine Hat where they built their own home and Bernice worked for Sears for three years. They moved back to Eastend in November 2005. Bernice loved needle work, gardening, sewing, crocheting and knitting.

Funeral Services will be held at St. Patrick’s R. C. Church in Eastend on Wednesday, February 24, 2016 at 2:00 p.m. with Reverend Father John Mock officiating. Interment will take place at Riverside Cemetery at Eastend. Binkley’s Funeral Service of Shaunavon (www.Binkleys.com) is in charge of the arrangements.