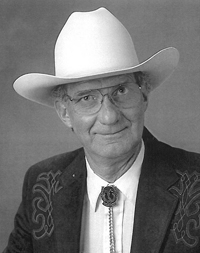 Alex was born January 12, 1928 in Edmonton to Samuel and Helen Clarke, one of five children. Alex remained in Edmonton until 1960, when he relocated his family to Medicine Hat. At that time Capital Glass Medicine Hat was founded followed by the divisions in Brooks and Swift Current. Alex always remained a true local businessman, owning and developing local commercial real estate throughout the years.

Up until the time of Alex’s passing, he remained a very active citizen of Medicine Hat; in 1973, he was integral in founding the Medicine Hat Cubs Hockey Club which to this day remains a significant local organization. Recently Alex was nominated for the City of Medicine Hat Sports Wall of fame; something Alex would have been very proud of.

Alex was very honoured to be involved with the Medicine Hat Exhibition and Stampede, volunteering with the Stampede board for 55 years including this last summer’s rodeo. Alex proudly served as President in 1991 and 1992.

Alex also volunteered many hours with the service groups of Medicine Hat; The Shiners, Kinsmen, Elks, Moose, and The Legion.

Alex could often be found enjoying a glass of red wine at Dayz Off Pub, spending time with his family including his grandchildren and great grandchildren.

Alex was certainly One of a Kind; his sense of humour and laughter will not soon be forgotten by all of those that loved him.

A Celebration of Alex’s Life will be held at the CYPRESS CENTRE, Medicine Hat Exhibition and Stampede Grounds, 2055 – 21 Avenue SE, on Wednesday, February 24, 2016 at 3:00 p.m. Memorial gifts in Alex’s memory may be made to KidSport Canada Alberta, Box 36107 Lakeview RPO, Calgary, Alberta, T3E 7C6 or through www.kidsportcanada.ca/alberta/donation. Condolences may be sent through www.saamis.com or to condolences@saamis.com subject heading Alex Clarke. Funeral arrangements are entrusted to