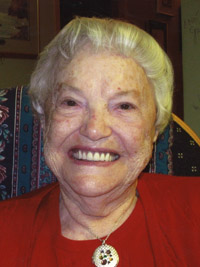 Teana Kramer of Medicine Hat, beloved wife of the late Fred Kramer, passed away on Tuesday, February 16th, 2016 at the age of 94 years. Teana leaves to cherish her memory her son, Grayson (Annabelle Lee); her daughter, Judy (Bill) Hartley; eight grandchildren, Brad Kahler, Russell (Teresa) Kahler, Corrine (Marlin) Kary, Kevin (Candice) Engel, Curtis Engel, Kim (Chris) Caudle, Rod (Shelly) Kramer, and Jennifer Ardiel; seventeen great-grandchildren; one sister, Ruth Fauser; as well as numerous nieces and nephews. Teana was predeceased by her husband, Fred; her parents, Christian and Mathilda Makus; one daughter, Janette (Lawrence) Kahler; six brothers, Robert, John, Alfred, Bern, Ray, and Henry Makus; and four sisters, Emily Fischer, Elsie Schneider, Anne Schamuhn, and Hilda Odenback. Teana was born on January 5th, 1922 west of Golden Prairie where she was raised and educated. In 1962, she moved to Medicine Hat and was a seamstress for many years working at Raber’s from 1971 to 1981. Teana was a member of Temple Baptist Church since 1962 and volunteered in many areas. She enjoyed reading, sewing and baking. Teana will be lovingly remembered and sadly missed by her family and friends. Interment will take place at Hillside Cemetery on Saturday, February 27th, 2016 at 1:00 p.m. Those wishing to attend are asked to meet at the cemetery gates at 12:45 p.m. The Funeral Service will be held at WUERFEL AUDITORIUM, 1720 Bell Street SW, on Saturday, February 27th, 2016 at 2:00 p.m. with Pastor Marcell Mitchell and Pastor Bob Findley co- officiating. Memorial gifts in Teana’s memory may be made to South Country Village (for the chapel), 1720 Bell Street SW, Medicine Hat, Alberta, T1A 5G1. Condolences may be sent through www.saamis.com or to condolences@saamis.com subject heading Teana Kramer. Funeral arrangements are entrusted to