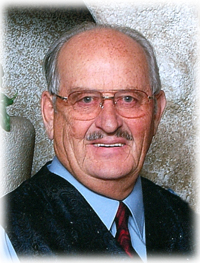 With sad hearts the family of Mr. John Byron Parsons, beloved husband of Mrs. Doreen Parsons, announce his peaceful passing at the Medicine Hat Regional Hospital on Friday, February 19, 2016, at the age of 84 years. Byron was born in Grenfell, SK., on March 13, 1931, to John and Mary Parsons. After growing up on the farm he was hired by the Toronto Dominion Bank in 1950. On March 14, 1953, Byron married L. Doreen Redfern, his high school sweetheart. Their son, Larry arrived in 1956; son, Terry in 1957 and daughter, Margo in 1961. Thirty eight years with the bank meant 13 moves from Ontario, Manitoba and Saskatchewan, making many lasting friendships along the way. Over the years, Byron enjoyed farming, playing ball, curling, golfing, fishing, hunting, trap-shooting and endless card games. He was a private pilot, a Shriner, a Rotarian, a poet, and aspiring painter, a jack of all trades and a man of many talents. Byron mastered playing his harmonica and worked at doing the same on the guitar. After retiring in 1997, Byron and Doreen moved from Regina to Medicine Hat, spending their winter months in Mesa, AZ. He became a member of the local wood carving club and the Happy Hatters. Byron’s beautiful carvings will now adorn all of his grandchildren’s homes as a remembrance of “Gramps”. We will all miss his sense of humour, his love of life and his fighting spirit. Byron will be lovingly remembered by Doreen, his wife of 62 years; son, Larry (Laurel) of Kelowna, BC., and family, Kristi (Brendan) Nelson, Shannon Parsons (Collie), Mitchell Merritt all of Calgary, AB., and Mathew Merritt of Revelstoke, BC.; son, Terry of Kelowna, BC and his son, Brandon of Red Deer, AB.; daughter, Margo (Fabian) Delwo of Medicine Hat, AB., and family, Justin Delwo of Toronto, ON., Trisha (Kevin) Churcher, Jared Delwo both of Kelowna and Carina Delwo of Medicine Hat, AB., three great-granddaughters, Eva, Juliana and Ayla; siblings, Doug (Lynn) of Grenfell, SK., Kathy (Glen) Smith of Moose Jaw, SK. and sister-in-law, Mary Parsons of Regina, SK., numerous nieces and nephews who shared special occasions and places in his heart as well as his relatives down-under in New Zealand. Byron was predeceased by his parents, John and Mary; brother, Elgin; sister, Clare (Howard) Derby; Doreen’s parents, John and Charlotte Redfern and brothers and sisters-in-law, Henry & Eleanor, Cyril & Iola and Wallis & Gladys. A Celebration of Byron’s Life will be held at Cook Southland Funeral Chapel, 901 – 13 Street S.W. Medicine Hat on Saturday, February 27, 2016, at 1:00 p.m. with Life Celebrant Gerry Getz officiating. A time of fellowship and refreshments will follow immediately thereafter in the Cook Southland Reception Facility. If friends so desire, donations may be made in Byron’s name to the Heart & Stroke Foundation of Alberta, #124, 430 – 6 Avenue S.E., Medicine Hat, Alberta, T1A 2S8. (Condolences may be expressed by visiting our website at www.cooksouthland.com) Honoured to serve the family is