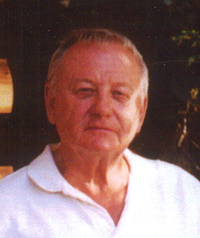 Ken Van Wert, beloved husband of Jean Van Wert of Medicine Hat, passed away early Thursday morning, February 25th, 2016, at the age of 79 years. Ken also leaves to cherish his memory his nephew, Richard Van Wert (Joanne) and his children, Landon, Dallon and Jazmon, and Joanne’s son, Brett. Ken was predeceased by his parents, Ted and Yortha Van Wert; and one brother, Edward Van Wert. Ken operated Redcliff Bus Lines for many years and then formed Tot-em Transportation which he owned and operated until his retirement. He was a graduate of UBC and USC in economics and psychology. Ken was a Charter Member of the Redcliff Lions Club and a lifelong ardent fan of jazz playing his trumpet in several small groups he formed locally and in Vancouver. Ken enjoyed jazz music and good trumpet players. For 34 years, he walked the trails near his cabin on Ashley Lake with dogs Bussie, Totem and Dancer, and fished for trout, silver salmon and perch. He loved sharing Moose’s Pizza and good wine at the cabin with the many guests who stayed with them. Ken and Jean also enjoyed their home in Scottsdale where Ken would watch The Open with friends down the street while having terrific margaritas and Mexican food at Ajo Al’s. He visited many jazz venues with the swinging sounds of Danny Long, Delphine Cortez, Tim Robbins and The Divas to name only a few. Ken was a trusting friend, caring boss, a kind and truly good man. He will be missed by his many friends and family, especially by Jean. Now he can ‘discuss’ with those in the universe. Ken, we will miss your mind and wit and smile. Hopefully, the universe is for you, JAZZ ONLY! A Private Graveside Service will be held at SAAMIS PRAIRIE VIEW CEMETERY, on Wednesday, March 2nd, 2016. Family and friends are invited to a Gathering to Remember Ken at 65 Ross Heights Court SE at 4:00 p.m. Memorial gifts in Ken’s memory may be made to the SPCA, 55 Southwest Drive SW, Medicine Hat, Alberta, T1A 8E8. Condolences may be sent through www.saamis.com or to condolences@saamis.com subject heading Ken Van Wert. Funeral arrangements are entrusted to