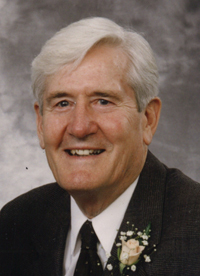 Mostyn Earl Greenwood of Medicine Hat, beloved husband of the late Doris Greenwood, passed away on Sunday, March 6th, 2016 at the age of 92 years. Mostyn leaves to cherish his memory his children, David Greenwood (Liane Perrior), Judith Graham, Kim (Fred) Rowley, Diane (Tom) Vair, Janet Stang, and Karen (Bob) Marshall; 15 grandchildren; 21 great-grandchildren; one great great-granddaughter; as well as numerous nieces and nephews. Mostyn was predeceased by his wife, Doris; his parents, Chester and Annie Greenwood; one son, Murray Greenwood; one son-in-law, Ken Stang; and three brothers, Rud, Len and Colwyn. Mostyn was a World War II veteran. He worked for Canada Post as a letter carrier for 38 years and enjoyed collecting stamps and coins. Mostyn was raised as a market gardener loving nature and the outdoors, hunting and travelling. He also enjoyed playing cards and crokinole. His family and faith were very important to him and he will be greatly missed by all those who knew and loved him. Those wishing to pay their respects may do so at the CHURCH OF JESUS CHRIST OF LATTER-DAY SAINTS, 1865 Division Avenue NE, on Thursday from 12:00 to 12:55 p.m. The Funeral Service will be held at the CHURCH OF JESUS CHRIST OF LATTER-DAY SAINTS on Thursday, March 10th, 2016 at 1:00 p.m. with Bishop George Schow presiding. Interment will follow in the family plot at Saamis Prairie View Cemetery. Memorial gifts in Mostyn’s memory may be made to the Society of Grasslands Naturalists, Box 2491, Medicine Hat, Alberta, T1A 8G8. Condolences may be sent through www.saamis.com or to condolences@saamis.com subject heading Mostyn Greenwood. Funeral arrangements are entrusted to