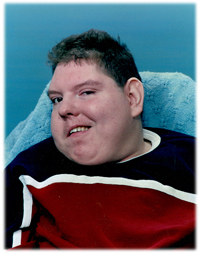 Mr. Curtis Brian Wisnowski, passed away peacefully while in the loving care of Alfred Egan Home in Bow Island, Alberta, on Thursday, March 3, 2016, at the age of 32 years. Curtis was born in Medicine Hat on May 22, 1983. He is survived by his father, Brian (Shelley) Wisnowski; mother, Roxanne Wisnowski; brother, Chris (Chantel); two half-brothers, Robert (Megan) and Regan (Ashton); half-sister, Katlyn (Cody); four nieces and numerous aunts, uncles, cousins, and care providers. Curtis was predeceased by his grandpa, Chester Wisnowski (1994), grandma, Dorothy Wisnowski (2014), Foster mom, Betty Wilson (1993) and his nanny Doreen and papa Robert Woods. Curtis was diagnosed with spinal meningitis at the age of 2 months. Due to his enduring special needs he entered foster care in 1985. He spent many years with foster parents, Betty and Adair in Bow Island before moving to a children’s group home in Medicine Hat (CORE) and later a group home for adults (REDI Enterprises) and then moving to Alfred Egan Home in November of 2012. Curtis was a quiet, unassuming, pretty happy guy. Although unable to speak, Curtis communicated with his eyes and his smile. He liked to be around others and all the action. When everyone would be having fun, laughing and joking around, Curtis would smile BIG and if things really got out of hand he would laugh with everyone or at everyone. Curtis will be sadly missed by his friends and staff at Alfred Egan Home and the other homes where he lived. Those wishing to pay their respects may do so at Cook Southland Funeral Chapel, 901 – 13 Street SW., Medicineâ€ˆHat, on Thursday, March 10, 2016 beginning at 1:00 p.m. The funeral service honouring Curtis’ life will follow at 2:00 p.m., with Reverend Father Fred Monk, celebrant. Interment will take place at Hillside Cemetery. (Condolences may be expressed by visiting our website at www.cooksouthland.com). Honoured to serve the family is