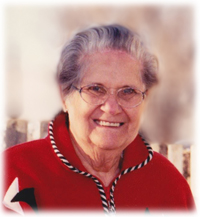 Mrs. Marjorie Mack (nee Hillenberg), beloved wife of the late Mr. John William Mack passed away at the Good Samaritan Society, on March 4, 2016 at the age of 94 years. She was born on the farm south of Medicine Hat and then moved with her family to Medicine Hat at the age of 5 where she was raised and attended school. Marjorie completed Normal (Teaching) School in 1941 and taught in Tilley, Redcliff and Ralston. She also worked as a statistician for a couple of years in the late 1940’s, while living with her brother, Wallace in Brooklyn, NY. She completed her teaching career when she married John on July 26, 1956 in Medicine Hat. Marjorie loved to occupy her time with many activities including, reading, crossword puzzles, family history, enjoying the prairie habitat of buffalo beans, cactus berries, wild roses and crocuses. Her family was her life and she loved to share the joys of baking shortbread cookies and going on picnics. Family and friends will fondly remember that Marjorie always carried a camera with her capturing everything from special events but more often random everyday pictures. Marjorie was a dedicated and loving wife, mother, grandmother and great-grandmother whose family always came first. She never missed an activity or sports event that her children and especially her grandchildren were involved with. Marjorie was a proud and active member of many organizations throughout the years, but most notable were the Beta Sigma Phi sorority, PEO, Pythian Sisters, retired teachers, Legion Womens Auxillary and the Baptist church womens group. Her memory will be treasured in the hearts of her family, children, Jean (Tom) Malmberg, Christine (Colin) Chisholm, David Mack, Norma (Ken) Anderson, Lorraine (Marcel) Liboiron, Margaret (Doug) Henderson; grandchildren, Clinton (Nickie) Malmberg, daughter, Chloe; Kori (Brian Megyes) Malmberg; Alex (Lindsay) Chisholm, sons, Colin, Brody, Sawyer; Tara (Derek Whitson) Chisholm; Nolan (Jessica) Chisholm; Melissa (Joel Lutz) Mack; Benjamin, Gideon, Isaac, Ruth, Samuel, Josiah, Hannah, Keziah and Naomi Anderson; Lance (Olivia) Liboiron, their children, Lexi, Macklin; Blake (Tanya) Liboiron, son, Linkin; Landon Liboiron; Samantha Henderson; Marshall Henderson; Grayson Henderson and numerous nieces, nephews, cousins and friends. Marjorie was predeceased by her husband, John William (1973); son, Gerald Edward; parents, John Hillenberg, Dora (Weiss McKean) Hillenberg; sisters, Dorothy Brown, Estelle McArthur; brothers, Wallace McKean and John McKean and numerous sisters-in-law and brothers-in-law. Marjorie would wish that all who knew and loved her would pass forward a kind word, a good deed or help someone in need. If friends so desire, memorial donations in Marjorie’s name may be made directly to a charity of one’s choice. (Condolences may be expressed by visiting www.cooksouthland.com) Honoured to serve the family is

One Condolence for “MARJORIE MACK”