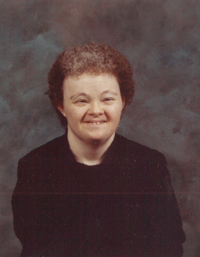 Patricia “Patty” Lynn Bonogofski of Medicine Hat, passed away on Thursday, March 10th, 2016 at the age of 57 years. Patty leaves to cherish her memory her parents, Peter and Barbara Bonogofski of Medicine Hat; two sisters, Ann (Larry) Flaig of Assiniboia, Saskatchewan and Betty Ann (Terry) Bugg of Lethbridge; one nephew, Justin (Jackie) Bugg; one niece, Jennifer Bugg (Jamie Arnold); one great niece, Reese; two great nephews, Linden and Heston; as well as numerous aunts, uncles and cousins. Patty was born on August 9th, 1958 in Leader, Saskatchewan where she was raised until the age of 9, when the family settled in Medicine Hat. She attended George P. Vanier School. Patty enjoyed craftwork and watching sports, especially hockey and baseball. She will be missed and her memory will be forever cherished by her family and friends. Vigil Rites (Prayers) will be held at SAAMIS MEMORIAL FUNERAL CHAPEL, 1 Dunmore Road SE, on Monday, March 14th, 2016 at 7:00 p.m. The Funeral Mass will be celebrated at ST. PATRICK’S ROMAN CATHOLIC CHURCH, 238 – 2nd Avenue NE, on Tuesday, March 15th, 2016 at 1:00 p.m. with Father Tomy Manjaly, celebrant. A private interment will take place in the Roman Catholic Section at Hillside Cemetery. Memorial gifts in Patty’s memory may be made to the Special Olympics Alberta, 11759 Groat Road NW, Edmonton, AB T5M 3K6. Condolences may be sent through www.saamis.com or to condolences@saamis.com subject heading Patty Bonogofski. Funeral arrangements are entrusted to