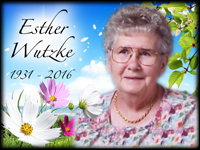 Mrs. Esther Wutzke passed away peacefully at the Medicine Hat Regional Hospital on Wednesday, March 9, 2016, at the age of 85 years. Esther’s memory will live on in the hearts of her family: children, Sheila (John) Reeder and their children, Blaine Reeder and Jason (Sherry) Reeder and families; Pam (Garth) Ferguson and their children, Dustin (Kendra) Ferguson and Tanya (Kyle) Biko and families; Monica (Mark) Weishaar and their son, Lane Weishaar; Harry – Deceased and his children, Kendra Klatt (Wyll) and Natalie (Kurt) Reid and families; Elroy – Deceased (Debbie) and their children, Rob (Sheena) Wutzke, Michelle (Jayden) Carle, Dustin (Jessica) Lane and Yolanda (Sam) Tong and families; Ray – Deceased (Lilly) and their children, Tammy and Cindy and families. She will be lovingly remembered by her brother, Clarence Seefried; sister, Frieda (Alfred) Yanke; sister-in-law, Alice Wutzke as well as numerous nieces and nephews. Esther also leaves many friends including Wilfred Scharfl “More a son than a friend”. Along with her three sons, she was predeceased by her parents, Robert and Annie as well as two sisters and a brother. Esther was born on the family homestead West of Redcliff on February 2, 1931. Once married, she lived a short time in Iddesleigh before moving to Suffield where she ran the store located next to the highway. Esther was a very social person, and this helped her to excel in her roles while working with the Cypress View Foundation after moving to Medicine Hat. She had a great sense of humour and helped everyone enjoy the lighter side of life. The oven was always on and her door was always open! Esther was an exceptional cook and relished in every opportunity to prepare a meal, especially if it meant an opportunity to bring the family together. Her legacy will live on within the strong family values she instilled in her children and the memory of her warm smile and caring nature. A Celebration of Esther’s life will be held at Cook Southland Funeral Chapel, 901 – 13 Street S.W., Medicine Hat on Monday, March 14, 2016, at 2:00 p.m. Those wishing to pay their respects may do so beginning one hour prior to the service, from 1:00 p.m. to 1:55 p.m. (Condolences may be expressed by visiting our website at www.cooksouthland.com ) If friends so desire, memorial tributes in Esther’s name may be made directly to the Medicine Hat SPCA, 55 Southwest Drive S.W., Medicine Hat, Alberta, T1A 8E8. Honoured to serve the family is