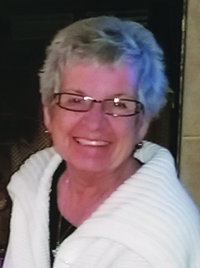 Janet passed away Dec 5,2015. Her celebration of life is being held March 26,2016 in Sechelt,B.C. Janet is forever loved and missed by her children Shelly Beierbach, Mike Samoleski, Chad Samoleski (April) and their families. Also sister Sheila Betker (Rick), brothers Gordon Sample, and Myron Sample (Karen) Janet will spend eternity in heaven with God and Jesus.