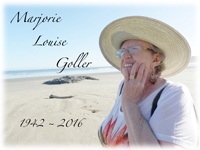 Marjorie (Hurlbut) Goller, beloved partner of Harvey Geigle of Medicine Hat, passed away peacefully at home while in the loving presence of her family on Thursday, March 17, 2016, at the age of 73 years. Marjorie is survived by her children: Marie (Fernand) Duperreault, Janes (Dianna) Goller and Lori (Andy) Fedechko; grandchildren: Mark, Selena, Colton, Logan, Keira and Carter; Harvey’s children: Darcy (Laurie) and Deb as well as grandchildren: Shaylee, Taylor and Danika. She is also survived by her sister, Persis (Gerald); brother, Dan (Fern) and many nieces and nephews. She was predeceased by her parents, Jim and Marjorie Hurlbut (nee Byam) and husband, Francis Goller. Marjorie was born in Medicine Hat on December 16, 1942, daughter to Jim and Marjorie Hurlbut. She spent her early years in Bow Island before the family moved to Ralston. She left Ralston when she married Francis Goller in 1961 to begin her life as a ranch wife. They lived mostly in southern Alberta but ranched west of Edmonton for 10 years until Francis passed away in 1991. She then bought a farm with Janes and moved to Hay Lakes before returning to Medicine Hat in 1997. Marjorie loved to dance! She met Harvey who shared her passion of dancing and he quickly swept her off her feet. They enjoyed time together at baseball and hockey games and she cheered Harvey on at the curling rink. Marjorie and Harvey loved to travel and visited Mexico, Alaska, the Caribbean and Las Vegas. They often went on casino road trips to Lethbridge and Moose Jaw and always brought back stories of the fun they had. In 2014, she was able to travel to Nova Scotia with her sister, Persis, which was always a life long dream of hers. Marjorie adored all of the grandchildren as they brought her such joy. Her passion for gardening, animals and dancing lasted throughout her lifetime. She was an active member of the Irvine Lions Club and Medicine Hat Women of the Moose. A celebration of Marjorie’s life will be held at Cook Southland Funeral Chapel, 901 – 13 Street S.W., Medicine Hat on Saturday, March 26, 2016, at 11:00 a.m. with Life Celebrant Gerry Getz officiating. Interment will follow at Hillside Cemetery. (Condolences may be expressed by visiting our website at www.cooksouthland.com) If friends or family so desire, memorial tributes in Marjorie’s name may be made directly to the Canadian Cancer Society, 102 Crestwood Square One, 1865 Dunmore Road S.E. Medicine Hat, Alberta, T1A 0H5. Honoured to serve the family is