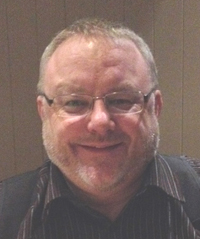 Patrick was a graduate of Vancouver Community College and dedicated his whole life to the service of others. He was a volunteer firefighter, which he often referred to as “the best job ever”; the architect of many human service organizations including the Boys and Girls Club of Camrose, and the Today Family Violence Help Centre in Edmonton. For many years, Patrick was a Family Violence and Bullying Prevention Co- ordinator with Central Alberta Child and Family Services (provincial government). In 2011 he assumed the role of Provincial Co-ordinator for the Alberta Father Involvement Initiative. Patrick took it from a fledgling organization to a provincial project that co-ordinated with national and international similar organizations. He coined the phrase “There is a DAD for that” and created resources and delivered seminars across the province to support communities and organizations to promote positive fathering. Patrick was a force of nature and wherever Patrick lived or worked, he changed the world for the better. One of the things that gave Patrick great joy was to be “Santa” at Christmas time. There are countless children into whose lives he brought a bit of magic each year. He also had an incredible network of friends and colleagues who will miss him.

“Life takes us to unexpected places.

One Condolence for “DILLON, Jon PATRICK”