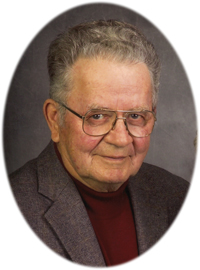 Arnold Frank Freitag, beloved husband of Frieda Freitag of Medicine Hat, passed away on Saturday, March 26th, 2016 at the age of 85 years. Arnold also leaves to cherish his memory his two sons, Wayne (Marla) Freitag and Gordon (Alda) Freitag; four grandchildren, Payton Freitag, Lincoln Freitag, Justin Freitag and Britt Goddu; two brothers-in-law, Gust Stojke and Herbert Stojke (Julie Hrup); one sister-in-law, Lydia Traichel; as well as numerous nieces and nephews. Arnold was predeceased by his parents, Adolf and Rosalia Freitag; two sisters, Irene (Roy) Fischer and Violet (Albert) Kundert; one grandson, Dustin Goddu; and two sisters-in-law, Irene Stojke and Marj Stojke. Arnold was born on April 30th, 1930 in Medicine Hat, AB and soon moved to Richmound. He attended Oasis School, at first only speaking German. It was not long before his parents started him in his career as a farmer. He liked to work for himself, independent and free, an avid do-it- yourself person. In 1961 he married Frieda Stojke and they lived on their farm near Richmound. He enjoyed farming; even more so getting his boys into farming and watching them with their successes and failures. He enjoyed people, especially children which were attracted to him for continuous teasing and whisker rubs, and going for morning coffee, armed with his toothpick. Being community minded, he was involved in the Bethlehem Lutheran Church, the Local School Board, was a RM Councillor, a Lions Club member as well as a curler and a bowler. After retiring to Medicine Hat in 1992, Arnold resumed his passion for the saxophone, playing in the church band as well the choir and enjoying his new community and friends. He loved the Lawrence Welk Show. His hobby was spending hours in the garage making wooden crafts on his scroll saw and lathe and making trips back to the farm checking on his boys. In December 2010 he lost his independence due a stroke which left him in a wheelchair and unable to speak. Frieda’s role changed and she became his faithful visitor and companion for the 5 years he was at the seniors’ home; Arnold would wait for her at the front door when he was able and he appreciated her affectionate goodbyes. He did what he could and was frustrated not being able to communicate well but still enjoyed people. On March 26 his frustration ended. Rest in Peace Arnold. Those wishing to pay their respects may do so at VICTORY LUTHERAN CHURCH, 2793 Southview Drive SE, on Thursday from 12:30 until 1:25 p.m. The Funeral Service will be held at VICTORY LUTHERAN CHURCH, on Thursday, March 31st, 2016 at 1:30 p.m. with Reverend Jim Bredeson and Diaconal Minister Lila de Waal co- officiating. A private interment will take place at Saamis Prairie View Cemetery. Memorial gifts in Arnold’s memory may be made to Alberta Heart and Stroke Foundation, Alberta Heart & Stroke Foundation, 124, 430 – 6th Avenue SE, Medicine Hat, Alberta, T1A 2S8. Condolences may be sent through www.saamis.com or to condolences@saamis.com subject heading Arnold Freitag. Funeral arrangements are entrusted to